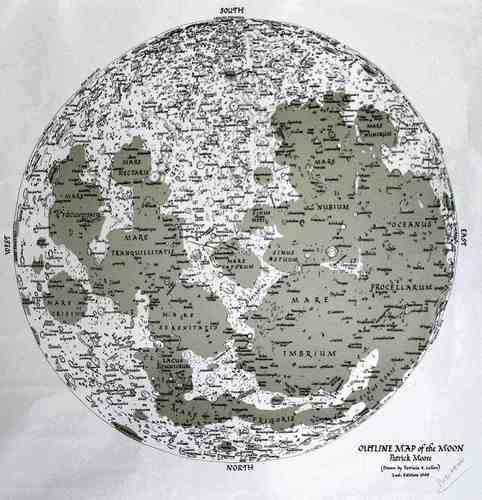 Sir Patrick Moore, CBE, FRS, is to release 250 signed limited edition prints from his original Moon Map – which has been hidden away in Patrick’s Selsey home for almost 40 years!

The size of the prints are approximately A0, 695 x 996mm, and are limited to 250 copies, each signed by Sir Patrick at Farthings, his home, and come with a certificate of authenticity which includes a photograph of Patrick during the signing.

The original Moon Map was drawn by Sir Patrick in about 1969.

These maps are being released as a special commemorative issue to celebrate the 40th anniversary of the Apollo missions and space travel.

Apollo 11 was the first manned mission to land on the Moon and carried astronauts Neil Armstrong, Michael Collins and Buzz Aldrin.

As well as being a detailed and accurate map of the time for those interested in exploring the Moon through a telescope or binoculars, these collector’s edition maps will appeal to anyone with an interest in historic maps or who can remember the excitement of the 1960’s Space Race.

The prints are a superb quality. They have been printed for Patrick by the Ordnance Survey on 240 gsm card with a silk finish, so are ideal for framing and wall display.

The maps are being sold for Sir Patrick by STAR distribution at £45.00 each.