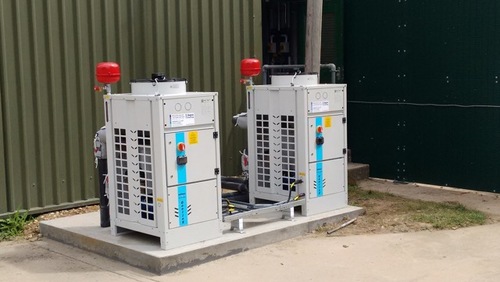 Homes across the South of England are to benefit from environmentally-friendlier drinking water in the New Year thanks to a cooling innovation being implemented by leading Hampshire/York cooling engineers at Aqua Cooling.

In the wake of a government directive issued by the Drinking Water Inspectorate (DWI) outlawing the use of chlorine in the preparation of drinking water, many commercial water suppliers have been forced to reassess their purification processes.

“The Aqua system works by chilling a mix of water and anti-freeze to approximately zero degrees. By then passing this mix through a titanium heat exchanger the water can be cooled without any adverse chemical effects.

“Our process ensures water cleanliness of the highest quality while avoiding the cost and inconvenience of having to discard contaminated water that has been chemically distorted by overheating.

“We are pleased to have been able to put our technical expertise to good use in solving this environmental problem for Southern Water — it may be that other regional water suppliers will install similar systems in the coming months and pass on the benefits of such eco-friendly drinking water to their consumers,” added Zak.

The Air Cooled Chiller system developed by multi-award winning engineering company Aqua Cooling, head-quartered in Fareham/with an office in York, has been designed to avoid the use of chemicals including chlorine in the preparation of drinking water.

Southern Water provides water and waste-water treatment services to homes in Kent, Sussex, Hampshire, and the Isle of Wight as well as parts of Surrey and Berkshire. Aqua’s Air Cooled Chiller systems are expected to be in operation from February 2016 at eight of Southern Water’s regional sites including on the Isle of Wight and in the Southampton, Lyndhurst, and Pulborough areas.