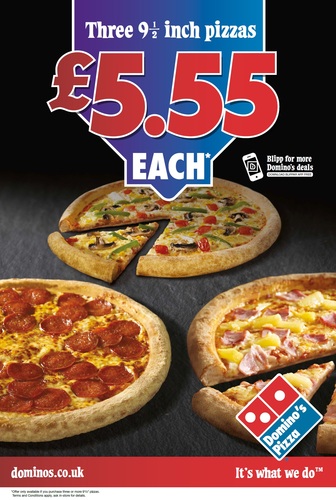 Domino’s Pizza, the pizza delivery expert, has launched a new six-sheet poster campaign with Blippar to bring its latest 555 pizza deal to life.

Over 6,000 sites across the country now sport Domino’s poster, which uses the Blippar app to create an augmented reality experience. Users can download deals for their nearest Domino’s store, get the Domino’s mobile ordering app, become a Facebook fan and view their local menu, all by looking at Domino’s poster through a smartphone. The different features of the six sheets ‘jump’ off the page when viewed through the Blippar app.

To non-Blippar users, the poster simply shows Domino’s current 555 deal, which offers any three (or more) 9½” pizzas for just £5.55 each.

Nick Dutch, multimedia manager at Domino’s, said: “We’re always looking for innovative new ways to engage with our customers using the latest technology. This exciting new campaign with Blippar provides us with a great opportunity not only to communicate a good pizza deal, but also to engage with users by offering them information specific to their local store and other features just for mobile users. With sites up and down the country, we’re looking forward to pizza lovers blipping it where they live to get more from our posters.”