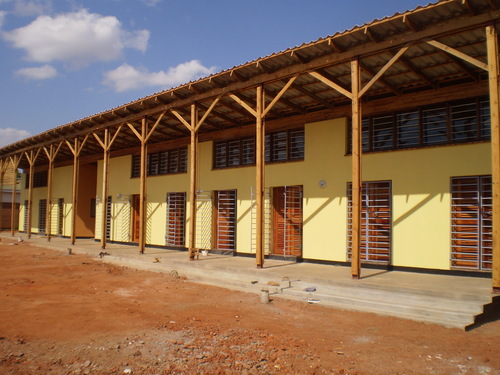 KASUNGU, MALAWI, 13th May 2011 – MicroLoan Foundation, the Chiswick-based charity providing small loans and guidance to women in sub-Saharan Africa, has formally opened the Kasupe Training Centre at its Malawian headquarters in Kasungu, at an official ceremony. The training centre, opened by Guest of Honour and MicroLoan Foundation Chairman Bishop Francis Kaulanda, forms an essential part of MicroLoan Foundation’s ongoing MicroVentures programme to help many thousands of women to develop long-term sustainable enterprises in areas such as irrigation, renewable energy and information technology.

Since it was established in Malawi in 2002, MicroLoan Foundation has strived to reduce the depth and breadth of poverty in the communities in which it operates through the provision of microfinance and business skills training. The opening of Kasupe Training Centre is a huge step towards achieving this goal by supporting client’s graduation to value-added enterprises that will enable them to become independent of aid, role models for future development, and employers in their communities.

“The opening of Kasupe Training Centre is the latest phase in our MicroVenture’s programme which aims to benefit the poorest and most marginalised women in sub-Saharan Africa across our 20 branch network,” explained Alfred Nhkoma, Head of MicroVentures, MicroLoan Foundation. “The centre will provide that essential business training to empower clients financially and the technical expertise to use more cost-effective and efficient agricultural methods.”

In addition to several training rooms, Kasupe Training Centre includes an IT centre which will be used to train internal employees as well as offering both IT training services for other organisations and an internet cafe for the general public. The new facility will also serve as a base for MicroLoan Foundation’s ongoing work with other Non-Government Organisations such as United Nations Development Program’s “Pro-Poor Fund” and the Belgian Government’s development agency.

“There is a real absence of SME’s in rural Africa, and this investment is aimed at providing the training and facilities for partnerships with other NGO’s and companies to tackle the problem,” said Peter Ryan, Chief Executive, MicroLoan Foundation. “We do not underestimate the difficulty of the task ahead, but the opening of the Kasupe Training Centre is that all important first step.”

Kasupe, meaning “oasis” in English, has been financed by donations from Beit Trust, a sub-Saharan infrastructure development charity, and a separate private donation. London-based architectural practice Allies and Morrison, widely known for designing the British Embassy in Dublin and the Royal Festival Hall refurbishment at the Southbank, have designed the new building.