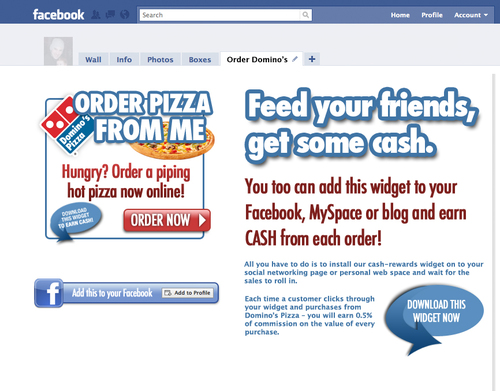 You too can add this widget to your Facebook, MySpace or blog and earn CASH from each order!

LONDON, APRIL 13, 2010 – Thanks to the new cash-rewards widget, everyone with a social network site or blog can cash in on the popularity of Domino’s Pizza. All you have to do is install the widget on your site or profile page, start promoting Domino’s and wait for the sales to roll in.

You’ll get a cash reward each time a friend or visitor to your website gets hungry and places an order with Domino’s. The widget will keep track of your sales and you’ll get a generous slice from every purchase, 0.5% to be precise. So if you want to make some serious cash with Domino’s, whet your friends’ appetite and let them know where to order.

You can download the widget at www.dominos.co.uk/widget – where you will find simple instructions to install it to your Facebook, MySpace or blog. Later, when you want to check or collect your commissions, you can sign up with Domino’s payment partner Affiliate Window – making it easy and safe to get your cash.

Go on, beat your friends to it, and download the Domino’s cash-rewards widget today!

Domino’s Pizza UK & IRL plc is the leading player in the fast-growing pizza delivery market. As at 27 December 2009, there were 608 stores in the UK and the Republic of Ireland. Of these, 481 stores are in England, 45 are in Scotland, 22 are in Wales, 14 are in Northern Ireland, 45 are in the Republic of Ireland and one is a mobile unit. The first UK store opened in Luton in 1985 and the first Irish store opened in 1991.