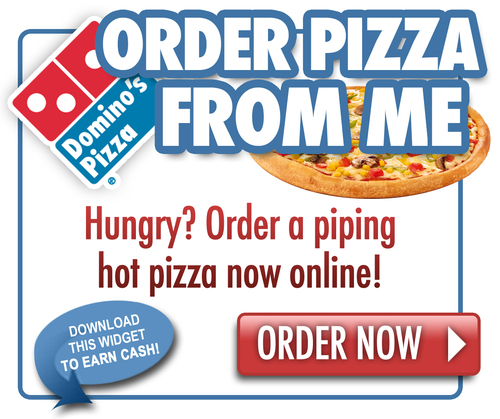 LONDON, April 29, 2010 – Only a month after its launch, Domino’s Cash-Rewards Widget is a raving success already.

The widget has been mentioned on over 2,100 blogs and almost 25,000 Facebook users have indicated that they like Domino’s in the UK and Ireland.

Domino’s is well aware that its popularity completely depends on word of mouth from satisfied customers. With the new widget, which allows everyone with a blog, site or profile page to promote the brand, they have found a way of recording recommendations and rewarding fans with 0.5% of the sales they generate.

The widget is also designed to encourage social networkers to share it with their friends. Several great online magazines are happy to have the widget on their front page, not to generate extra income but because they think it’s an interesting opportunity for their readers.

"The Dominos Widget has been one of the best widgets we've added to our London student forums,” says Matt Gill from www.londonstudent.co.uk. “Students are obviously huge internet users as well as pizza eaters, so this was a match made in pizza heaven."

Al Tepper, Head of Digital at EMP Plc, is very positive about the possibilities too: "We are integrating The Domino's Widget across www.AtHomeMagazine.co.uk because we want to share this opportunity with our readers."

“It is exciting that companies such as Domino's Pizza are starting to embrace all of the avenues available to the use of social media,” says blogger Brenda from http://familylife-brenda.blogspot.com, “so I have added the widget to my personal blog and my Facebook page.”

Peter Millikin, owner of the blog www.youcouldsave.co.uk, agrees: “The Domino’s Widget shows an in-depth understanding of modern IT technologies. This is a brilliant and easy to use ordering system which can be used on numerous social platforms.”