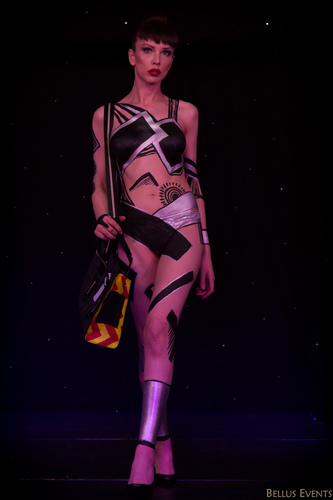 The much anticipated opening didn’t disappoint and the audience was absolutely amazed by the elegance and beauty of the bodypainted model, who brought the artwork of the talented bodypainter, Bobbi Bicker, to life.

Petra Truneckova, Managing Director of Bellus Events (http://bellusevents.com.), cast Johanna and directed the show. Commenting: “The show was a complete success and I am so grateful to my amazing team, and especially Bobbi and Johanna for creating such a wonderful and memorable event.”

The show also aimed to contribute in its own way to making both the fashion industry and the audience more familiar and accepting of the transgender community.

Johanna Londinium commenting: “I loved the show and I am super happy to have had the opportunity to represent the transgendered community on a bigger platform, to a bigger audience. The only way people are educated is by exposure and if me putting myself out there more is exposing people to the unfamiliar it can only be a good thing for me and the community I represent.”

Petra Truneckova, also the UK's gay wedding expert, adding: “I was inspired to cast Johanna by Caitlyn Jenner and the Kardashians show which has a massive audience of people who would probably never get to see a transgendered person. The ‘T’ for transgender in LGBT is the least understood term and hopefully my show has helped to educate too.”

Johanna Londinium commenting: “Caitlyn Jenner's transgender journey and the media attention has been great for my community. She handled her transition really well while educating her audience with genuine emotion in a tasteful and sensitive way. ”

Johnanna grew up in the nineties and was captivated by supermodels with their beautiful aesthetic and the confident, sexy iconic energy they projected into the world. Commenting: “As someone like me, who was starting the transgendered journey that has led to me being the woman I am today, having these kind of women was extremely aspirational for me. Women are the deal, in my opinion. In the words of Beyoncé, ‘Who run the world? Girls!’”

Adding: “I got into modelling from a background in make-up artistry and genuinely love being able to express elements of my personality in the styling I find myself wearing as a fashion model. Most of my modelling work has been as a female model with no reference to my transgendered journey.”

Note to editors: Additional photographs can be found here.
For more information or interviews contact:

Bellus Events is a boutique event management company, able to coordinate all requirements, from finding a suitable venue and amazing entertainment to completing the planning process with unique invitations, personalized decorations and exquisite floral arrangements to finish the look of your special event beautifully! Combining expertise and professionalism with a personal touch and unrivaled sophistication, we will assist you in making your dream event a reality.