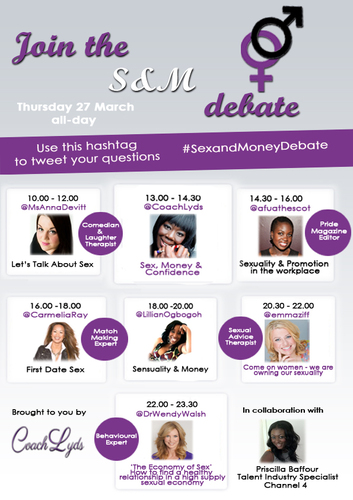 Frempong, who will be teaching the UK Coaching Partnership’s Diploma in Coaching course this April, is hosting an International Twitter Debate on Thursday, 27 March 2014. The conversation will uncover our relationship with Sex and Money. With eight years of personal development experience under her belt, Lydia is prepared to branch out and tackle relationship issues on a much larger scale. "Sex & Money is still a taboo subject". "We are vocal as a society thanks to the evolution of social media and technology, yet we still find it difficult to openly discuss or explore the subject in an honest and mature way, without any negativity” says Lydia who will be approaching the debate from both a personal and professional point of view. “Sex and Money is a universal topic and I want to understand people’s experiences and views on this subject. I would like them to be able to speak freely and receive guidance and help”

The Sex and Money debate will be Lydia Frempong's (Coach Lyds) second live-debate on Twitter. Last year, in honour of International Women's Day, the Confidence Coach hosted a 12 hour live Twitter marathon, accompanied by a panel of experts who took questions to empower women from all walks of life to further success in their work and lives.

Joining this year's Twitter debate on Thursday, 27 March 2014 will be an experienced team of female experts in the field of psychology:

The Sex and Money Twitter debate will be taking place on the Thursday, 27 March from 10:00 - 22:00 . Join in the conversation by adding #SexandMoneyDebate or #SexandMoney14

For more information about the debate and interviews contact:


Lydia Frempong is a Business Woman and Life Coach, she is the Founder of Butterfly PR a boutique agency which specialises in working with the Celebrities, Charities and the Corporate Sector. Lydia works with a diverse range clients from entrepreneurs to current and next generation media industry professionals. She focuses on giving people the psychological, personality and practical tools they need to be successful.

Lydia is a sought after as a Life Coach in the media because of her ability to apply her energy and focus to develop media careers and was recently appointed by The UK Coaching Partnership to teach and train student coaches at Cambridge University. In 2011 she won a BITC “Leadership in the Workplace Award” being described in the press as “Britain’s most enterprising professional”.

Lydia works to transform the way in which leaders and individuals promote themselves and run their businesses. With Channel 4, she works as an Executive Coach and trainer delivering coaching sessions, encouraging personal development towards career progression and promotion for Channel 4 employees.

Lydia a Patron for Show Racism The Red Card and a columnist for In-SpireLS Magazine, where writes articles which motivates change, uncovers personal issues and provides tips and techniques to enhance lives. www.coachlyds.com' rel='nofollow' target='_blank'>CoachLyds


Dr Wendy Walsh was nominated for an Emmy Award for her work as co-host on The Dr. Phil spinoff, The Doctors TV show. She also hosts Investigation Discovery Network’s “Happily NEVER After,” as well as being part of Dr. Drew’s Behavior Bureau on HLN Network. On CNN and 9 Network, Australia, she breaks down the psychology of sex, love, gender roles, divorce, parenting and other human behaviors. Dr. Wendy is an Adjunct Professor of Psychology at California State University, Channel Islands. She holds a B.A. in Journalism, a Masters degree in Psychology, and a Ph.D. in Clinical Psychology, and is the author of three books and numerous publications, including The 30-Day Love Detox. She appears regularly on The Today Show, CBS This Morning, Good Morning America, The Steve Harvey Show, The O’Reilly Factor, Inside Edition, The Katic Couric Show, Jane Velez-Mitchell, and The View. www.drwendywalsh.com' rel='nofollow' target='_blank'>DrWendyWalsh

Afua Adom moved to London from Glasgow at aged 17 to study journalism at City University. After specialising in broadcast and music, Afua found herself working at T4 and PopWorld before moving on to the dizzy heights of 60 Minute Makeover on ITV.

She grew bored of decorating strangers' homes in an hour or under and made the leap to music publishing where she worked for Blue Mountain Music under the watchful and legendary eye of Chris Blackwell. After styling a few bands for the label, she realised this was her passion and left music to freelance as a stylist and writer. She styled for Rhian Benson, Terri Walker and The Def Jam Comedy Tour as well as many 'normal' clients before landing a job at Blackhair as Editorial Assistant. Afua rose to Editor after only a year and left to be Features Editor for Pride and Fashion

and Beauty Editor for New African Woman. She continues to style shoots and clients as well as write news and features, hair, fashion, beauty, women's interest and do celebrity interviews and is a newspaper reviewer and on-air contributor for Arise News. Afua is married to Patrick and lives and works in London. In her spare time she likes to make cushion covers, have manicures and take long walks by the canal. Afua

Carmelia Ray is an author, speaker, IDCA dating coach, matchmaking and attraction expert. Carmelia has been working in matchmaking for over twenty-two years and is a business development consultant in the online dating and matchmaking industry. She is also the CMO of Instant Chemistry; a bio tech company focused on matching singles through genetics.

Carmelia is a sought after dating and relationship expert who has appeared nationally on TV as the “go to” expert for matters involving online and offline dating, in today’s complicated and ever changing social environment. Carmelia has worked with many companies in the dating industry including Together, eLove, Elite Personal Search, Eligible Inc, Table for Six, It’s Just Lunch, Toronto Matchmakers, Cupid’s Coach, Lifemates Canada, Christian Filipina and Lavalife.

She has personally interviewed over 60,000 singles and helped over 7,000 clients with their search to finding someone special. She is the author of the E-book, “The Ultimate A-Z Guide to Attracting and Keeping Your Soul Mate” and matchmaking conference co-host to iDate. She currently writes for Inside Fitness, Your Tango, Top Choice, Lavalife & several online dating publications on the topics of Love, Sex, Dating & Relationships. She is founder of Carmelia Ray and co-founder of DatingLoveandSexTips. Carmelia

Emma Ziff is an internationally acclaimed Relationship, Dating & Sex expert in TV, media and radio, covering many topics that most people would run a mile from. Combining the knowledge of Dr Ruth with the humour of Joan Rivers, she is a sought after speaker and seminar leader empowering through self-awareness, in a fun and informative way. Emma has written books including: ‘How To Enjoy Sex On A First Date .... And Still Feel Guilt Free’, and contributes to many international newspapers and magazines on Love and Sex. She ultimately works with you to put the fun back into the bedroom...lounge... kitchen...bathroom. Emma

Anna Devitt is an award winning comedian, actress and business woman. Anna is DirectDevitt why? Because she's direct and not afraid to say the things others are! Funny, clever and no bad at making a cuppa!Anna

Lillian Ogbogoh work and passion in this life is empowering women. As the Sensuality Discovery Specialist, she enjoys guiding women to redefine their self-relationships and sensuality, taking them on a journey to rediscover their own desirable, sensuous and audacious woman that they really are. Working with women to give up on the limiting beliefs that keeps them trapped believing that they are unlovable, not enough, feeling insecure and lonely. Lillian also works with men to have the relationship that he deserves and desires, giving up the limiting ideas that keep him lacking in confidence to be seen as the alpha male in the 21st century.

Her work has led to speaking both internationally as well as locally in the UK; she has spoken in Europe and the Cayman Islands and is also a bestselling co- author of Success in High Heels a compilation book of 30 leading female authors. Lillian

Butterfly PR is a boutique agency which spreads its wings across all sectors of business. Our main areas of specialisms are Charities, Coporates and Celebrities, bringing them together to raise their profile and stand out amongst the crowd through coaching and traditional PR.