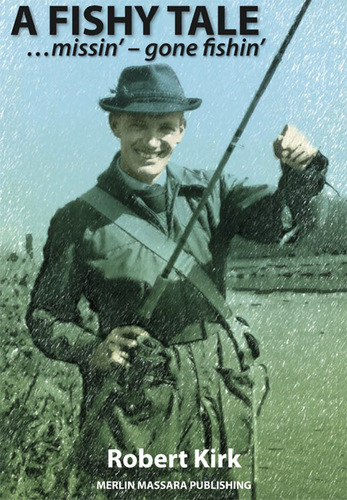 Merlin Massara Publishing is pleased to announce the publication of:

London, United Kingdom, 23 July 2009. "A Fishy Tale" by Robert Kirk discusses his life and times in the angling business. This is the story of a passion for fishing that spans eighty years. During peace and war, by day and night, in canal, lake, sea and river; Robert fished. He recalls fish caught (and lost) and items of equipment used to a level of detail that will delight the angling enthusiast. His fishing activities were almost curtailed during his WW2 service in the RAF with 218 Squadron as a rear gunner on Lancasters. However, the insights he recalls into life during this time are both informative and moving.

Post-war, Robert developed a career in the fishing tackle business, first as a retailer before becoming a designer and manufacturer of fishing rods. His wide technical knowledge of fishing tackle is rare and will be of interest to the enthusiast. With a keen interest in motoring Robert even found time to get involved in car rallying whilst living in Ireland but always as a secondary pastime to fishing. Meeting many interesting (and some famous) people during his life, Robert has a great store of anecdotes, adventures and occasional misadventures to tell of his ...missin' - gone fishin' life.

Robert Kirk had already developed his passion for fishing when the Second World War began, on his 15th birthday, bringing his childhood to an abrupt end. However it did nothing to diminish his growing passion for fishing. Serving as a tail gunner whilst in the RAF, he fished when and where he could. After the war Robert spent the rest of his working life, whilst bringing up a family, working in the fishing tackle business both in retailing but mainly in designing and manufacturing rods. Robert is now retired and living with his wife in Norfolk.

For those readers with an interest in fishing; with its developments, techniques and equipment over the last eighty years, this is a fascinating and enjoyable read. For angling enthusiasts and historians, it’s an information source chronicling the development of the angling business and the art of fishing.
For many ex RAF personnel, the WW2 stories of training in Africa and service with 218 Squadron in Lancaster bombers will be of historical, nostalgic and humanitarian interest.