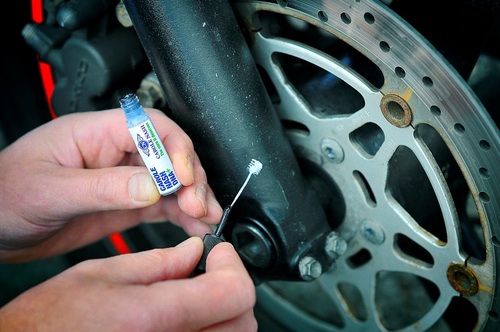 In a pioneering initiative the company is to provide a sophisticated combination of microdot and Digital Nanoparticle Authentification (DNA) technologies free to any biker who takes out or renews a Carole Nash policy. Dubbed Carole Nash DNA+ the product comes as a liquid which can simply be dabbed on key components to create a unique ID - and irrefutable evidence of ownership. That ID, or DNA, is then stored on an international database which the police can swiftly access to identify the particular vehicle.

Carrying a retail value of £30, Carole Nash DNA+ first and foremost is a deterrent. Bikers are provided with tamper-proof stickers which highlight that their machine is protected by an advanced forensic coding system. This heightens “criminal anxiety” as it increases the chances of them being caught. Forensic coding proves a particular irritation to professional thieves as individual components carry a bike’s unique forensic signature making it much harder to break up and dispose of otherwise valuable spare parts.

The scheme is being soft launched over three months (between October 1st and December 31st) and becomes an invaluable addition to an already packed policy benefits package - the company provides UK and European breakdown cover (including Homestart), legal protection and foreign use as standard with all its road motorcycle policies. Carole Nash DNA+ will prove a powerful weapon in the war against bike thieves as the company currently covers around 300,000 motorcycles – equivalent to around 20 percent of all road licensed machines.

Explaining why it was launching the new scheme, Carole Nash’s commercial director Simon Jackson said: “As the UK’s favourite insurance specialist* we are acutely aware of the financial and emotional cost of theft to bikers and indeed biking. A study recently estimated that theft costs the industry some £105m and reported evidence that around 40 percent of theft victims actually then go on to leave biking. That’s bad news not just for our business but for biking itself, so we see this very much as an investment and one that is well worth making.”

“By equipping our customers with this highly sophisticated technology we hope not only to add value to their insurance policy but to reduce theft rates across our customer base.”

The move follows the recent release of the annual Carole Nash Motorcycle Theft Survey which, by using actual claims data, pinpointed which bikers in the UK were most at risk of theft. On its publication the Motorcycle Crime Reduction Group noted its concern that compared to the automotive sector, motorcycle thefts are increasing with 77 bikes and scooters being stolen in the UK every day.

The pilot scheme is open to any biker taking out a new motorcycle insurance policy or renewing an existing one with Carole Nash.

2. Carole Nash was ranked as the UK’s 39th biggest UK insurance broker in August 2011 by Insurance Times magazine and employs over 300 staff in the UK and Ireland. A leading player in the classic car insurance sector it is also *the UK’s leading motorcycle insurance provider with its market-leading status confirmed by the independent bikers’ survey, RiDER Power, which has found the company the Most Used Broker in 2002, 2003, 2004, 2006, 2007, 2008, 2009 and 2010. The company’s portfolio also spans modern car, van, military vehicle, travel and home insurance.