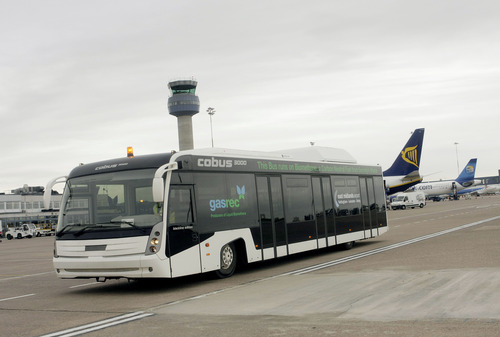 East Midlands Airport, 9 November, 2009: In a world-first, Gasrec
– the UK’s first commercial producer of Liquid Biomethane (LBM) - is entering into a six -month trial with East Midlands Airport (EMA), to run a Cobus 3000 passenger bus (which is used to transfer passengers from aircraft to the terminal building), powered by Gasrec’s LBM. LBM is a fuel produced from decomposing organic waste which is suitable for powering a wide range of commercial vehicles. When LBM is used as a vehicle fuel to displace diesel, it can achieve up to 60 per cent reduction in CO2.

The purpose of the East Midlands Airport trial is to collect information on the potential benefits provided by LBM, namely:

Information on all these areas will be recorded throughout the trial and compared to the performance of a similar vehicle fuelled with diesel.

It is expected that the trial will show significant air quality improvement and CO2 emission reduction. In a recent trial in London, Gasrec provided fuel for an Iveco Daily cage tipper (refuse collection) vehicle; the result was a 62 per cent saving in CO2 over diesel. As a result, there has been a large amount of interest in LBM and Gasrec, including from the Mayor of London, Boris Johnson http://www.ecotravel.org.uk/news1.asp?id=366.

The trial begins on 9 November 2009. The vehicle has been produced and adapted by Cobus, and provided to East Midlands Airport for the period of the trial by Gasrec and Cobus, with support from the airport. LBM fuel for the trial will be provided by Gasrec.

Gasrec CEO and founder Richard Lilleystone comments: “We’ve seen the positive environmental impact that LBM can deliver for our existing customers and more particularly in our trials with Iveco. Airports are tasked with reducing their carbon footprint and this is a clear step in the right direction. Businesses are now aware of the environmental and cost savings that can be made by using biomethane over diesel; and the performance improvement over using electricity. Biomethane is a waste-derived storable, transportable, B100 vehicle fuel available today.”

Neil Robinson, Director of Sustainability, East Midlands Airport said: “We have always put the importance of our local community and the environment around us at the centre of our plans. We have made significant efforts in recent years to mitigate the environmental impacts of our operations and we are really proud to be launching another airport first.

He continued: "In addition to trialing alternative fuel use on the airport site, we have recently made further positive steps towards achieving our goal of carbon neutrality and significantly reducing the carbon emissions from our operation. These steps include: drawing up plans for new green energy and technology, continually working to drive down noise and excessive fuel use through working with our airline partners and improving green transport options for passengers and staff."

This trial further highlights the many projects the Airport is implementing towards achieving its goal of carbon neutrality by 2012. East Midlands Airport was the first UK airport to be certified to the international environmental standard ISO14001 in 2002, which demonstrates the Airport’s commitment to operating to the highest environmental standards. The Airport has successfully retained this standard since.

In 2006, the Airport became the first airport in Europe to make public radar recordings of its operations, using WebTrak and the first UK airport to commit to make its ground operations carbon neutral by 2012.

In 2007, the Airport demonstrated it’s commitment to green energy by extending the departure lounge with a new green pier. The energy efficient pier obtains heat from 27 boreholes, each 100 metres deep, which is five times more efficient than other heating sources. In addition, the toilets in the low carbon pier use rain water (known as grey water) for flushing and all lighting is natural or low energy, reducing the impact on the environment.

In addition to these carbon friendly initiatives, the Airport is also the first in the UK to propose plans for four wind turbines to generate 10 per cent of the Airport’s electricity supply and has recently invested in alternative fuels for on site vehicles including bio-diesel (chip fat) and electric.

Gasrec produces this fuel by extracting the natural gas produced by biomass (organic waste such as food by-products) in landfill, or by digestion of the biomass byproducts of industries such as food manufacture and retail.

The gas is then converted to Liquid Biomethane (LBM), a commercially competitive and environmentally sound fuel that can be directly substituted for both Compressed Natural Gas (CNG) and Liquefied Natural Gas (LNG).

This LBM is used to fuel dedicated gas-powered or duel-fuel vehicles, from commercial trucks to high-performance cars; or for decentralised (off grid) power generation.

In addition to its partnership with East Midlands Airport, Gasrec is Iveco’s preferred supplier of LBM for Iveco’s natural gas powered range of Daily light commercial vehicles. This follows a successful six month trial in London, that resulted in a 62 per cent saving in CO² delivered by Gasrec’s liquid bio methane fuel over diesel.

The trial saw a Daily 65C14G cage tipper being used for recycling and street cleansing operations on behalf of Camden Council, during which time it operated exclusively on LBM. This highlighted LBM’s suitability as a high quality fuel for natural gas powered vehicles – against a backdrop of experiences which have shown that mains-supplied gas in the UK is likely to contain moisture and can therefore affect overall vehicle performance.

The LBM powered Daily emitted just 2,771 kg of CO² over this period, compared with 7,295 kg for the equivalent diesel model.

As the organic content of landfill decomposes, landfill gas is produced. This gas is actually a combination of potentially environmentally damaging gases, which include methane and carbon dioxide in different proportions depending on the content of the landfill. These gases are classified as 'Greenhouse Gases' (GHGs), which are deleterious to the environment and to human health when vented directly to the atmosphere.

Gasrec separates the methane from this mixture, and purifies it, before liquefying it to produce LBM. This creates a fuel that is environmentally sound and prevents harmful methane being released into the environment.

LBM not only offers an alternative to fuels generating harmful greenhouse gases which damage the atmosphere, but also burns more cleanly than liquid fossil fuel equivalents (diesel or petrol), with a 90% reduction in particulate matter, a 60% reduction in Nitrous Oxide and a 50% reduction in Sulphur Dioxide. On a well-to-wheel basis the CO2 savings achieved by using LBM as a fuel substitute for fossil diesel or petrol are in the region of 70% (as per JEC2006 and CONCAWE studies).

The generation of power from landfill sites in the UK is tried and tested, with more than 200 landfill sites generating approximately 1,700 MW/h each year. And yet still a number of sites continue to flare unused gas, wasting its energy potential and risking damage to the environment.

The supply of LBM is effectively inexhaustible, being classed as a renewable, and not subject to the vagaries of traditional oil and gas exploration, all factors that feed into its competitive economics of production.

LBM is a clean fuel at a competitive price suitable for any vehicle that is able to run on CNG or LNG.