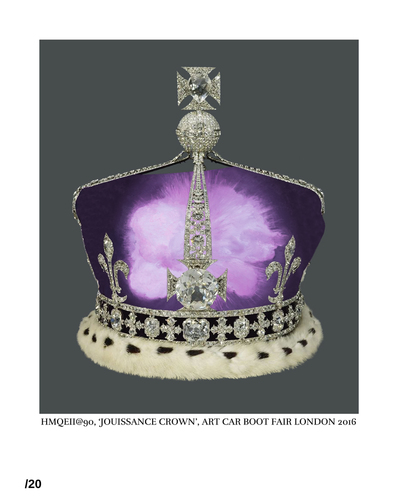 The philosophy is to take Art to car boot level with a pinch of carnival, which is accessible to everyone.

On Sunday June 12 between 12 noon and 6:00 PM at the cult happening, the Vauxhall Art Car Boot Fair 2016, renowned artist Christian Furr will be selling hand-made art bargains to the public from the boot of a Vauxhall ‘Let it Blue’ car.

As it's the Queens 90th year, Christian Furr and other prominent artists are making a very special edition of their own prints to celebrate her reign to date. The other artists joining Christian are Sir Peter Blake (of Sgt Pepper fame) and Keith Coventry. Also present selling their wares from the boots of cars will be Gavin Turk, Tracey Emin, Ben Eine, Matt Collishaw and many more.

Christian Furr, born in 1966, is selling his limited edition of 20 Queen 90th prints at the price of just £60 each and they will be available on a ‘first come first served’ basis only and one print per person. He is well qualified to produce the artwork because in 1995, he was notably the youngest artist to be commissioned to paint an official portrait of Queen Elizabeth II.

Christian says, ‘Artists are the mothers of invention and nowhere is this more evident than at the Art Car Boor Fair - a completely unique annual experience held in a car park in Brick Lane London, which combines fun with inventive affordable art and this year some artists are celebrating the Queen's birthday with a specials affordable edition.

‘The philosophy is to take Art to car boot level with a pinch of carnival, which is accessible to everyone. Because it's a philosophy that appeals to most free thinking artists you often have some high profile names present.

‘I first heard about the Art Car Boot Fair when my friend the Soho Tailor Tom Baker introduced me to Vanessa Fristedt AKA Swedish Blonde who had a part in the Art Fair’s origination.

‘When I was Channel Four's Richard & Judy’s resident art expert I persuaded them to cover the event for a feature.

Christian Furr continues, ‘I have had a pitch there a couple of times sometimes with my daughters and I am looking forward to doing it this year Its always a fun event.

‘One time I was there a friend came with his children. His young son had a broken arm in plaster so I asked Sir Peter Blake to sign it. The Art Car boot Fair is the only place where stuff like this would happen.