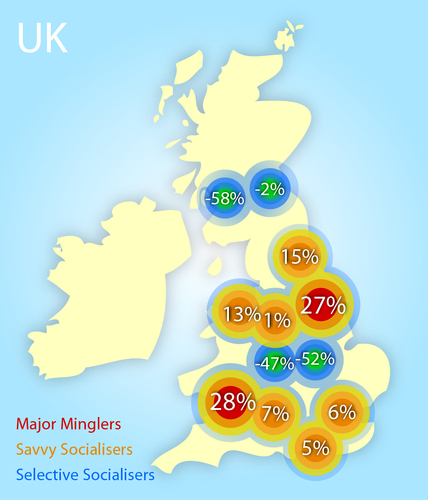 CitySocialising the UK’s largest socialising network for meeting new people, looked at the social habits of 160, 000 members across the UK and which of those had socialised the most throughout 2011.

The Welsh capital came out as the clear leader in the league table of Britain’s most sociable locations, closely followed by sociable Leeds and Newcastle.

Cardiff socialites were found to attend over a quarter (28%) more events than the average, with those in Leeds coming a close second with 27%.

However London, viewed by many as the social hub of the UK, was ranked as just the seventh most sociable location.

Interestingly, whilst London scored unremarkably on number of social events attended by users, those in the Capital were found to be by far the most prolific in terms of online interaction, sending more than double the number of messages than the national average.

Glaswegians however were found to be the wallflowers of the UK (58%) below the UK average number of social days and nights out attended. with Nottingham (52% below) and Birmingham (47% below) fairing the least sociable of the English cities.

Sanchita Saha, the site’s CEO and founder of CitySocialising commented:

“Cardiff residents were well ahead of the UK average in terms of number of days and nights out they were having in 2011.”

“I don’t find the results of our poll too surprising as Cardiff is definitely one of our up and coming cities when it comes to being sociable. We’re hosting around 40 events a month for our members to keep up with demand there. These range from after work drinks, to Sunday lunches and Saturday nights out."

She concluded: “The most surprising finding was that London, where we arrange over 50 events a month and viewed by many as the place in the UK with the biggest social buzz, actually only came in seventh.”

Please see below for a full list of the UK’s most, and least, sociable cities:

“Anyone that’s ever visited Cardiff will know what a fantastic city it is and how friendly the people are. It’s no surprise to me that it’s been found the most Sociable city by CitySocialising.

There’s a huge buzz from the city center, to Cardiff Bay. I’ve made a great bunch of mates here and there’s always someone new to meet and make feel welcome.“

*The research analysed the social habits of the site’s 160,000 members, before comparing the number of RSVPs – bookings onto events - made by users in the top twelve most active cities - to the average.

CitySocialising is the UK's leading socialising network for meeting new people, backed by PROfounders, the European VC fund set up by tech luminaries Brent Hoberman (Lastminute.com) and Michael Birch (Bebo.com). Pioneering the convergence of virtual and real world networking in the UK, CitySocialising enables young professionals to meet new people and new friends locally whilst exploring and enjoying their city’s social scene. Launched with R&D funding from the Princes Trust in 2007 with a site and service in London, the network has since developed a community of over 160,000 users, organising over 1000 socials a month across 50 cities in the UK, each overseen by a local Community Manager.