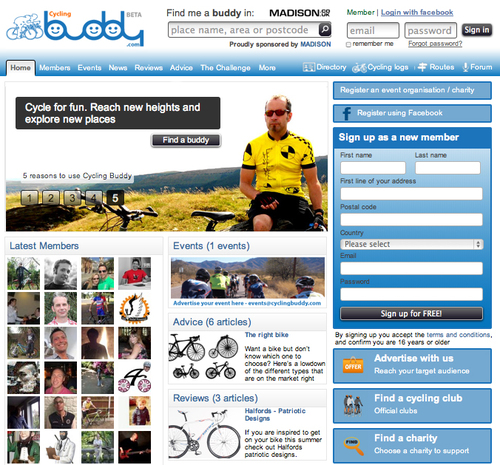 CyclingBuddy.com; The Social Networking platform for cyclists has today made the strategic decision to open its API allowing App developers to integrate with it.

Since launch CyclingBuddy members have manually logged over 150,000 cycling miles and shared over 1,100 of their favourite cycling routes. CyclingBuddy has already attracted members from 14 countries around the world, a remarkable level of growth considering the site is just over 3 months old. Opening up its platform to developers is a sharp signal of its intent to continue to build a solid platform of services for cyclists.

Tony Piedade, founder and CEO said " CyclingBuddy is a great community of cyclists of all ages and abilities, all looking to find someone else to cycle with. There are a multitude of Apps out there that are extremely good at recording and monitoring performance. We want to invite these App developers to integrate into CyclingBuddy.com. Its a great partnership! - we are really good at motivating people to cycle, while Apps are great at recording progress and performance once they have got "out of the door" - everybody wins"