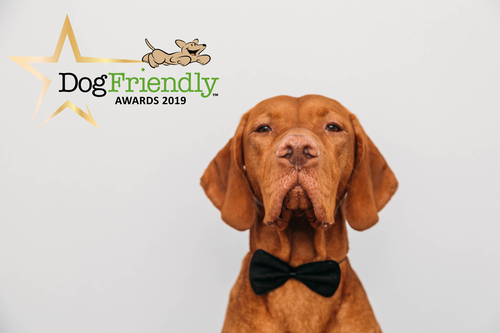 DogFriendly has launched its annual DogFriendly Awards competition, recognising businesses that welcome dogs and their owners….
In it’s seventh year, the competition invites businesses to compete to be crowned the most dog friendly places in the UK. Businesses can enter at www.dogfriendly.co.uk/awards and include Hotels/B&Bs, Self-catering and Cottages, Pubs, Cafes, Restaurants, Days Out, Shops, Employers and many more including dog services like Groomers and Pet Sitters.

Being dog friendly is becoming increasingly important to a lot of businesses that have realised they can boost trade and customer experience by welcoming dogs. There are 9 million dogs in the UK (one in every three households have a dog) and being able to travel and get out and about with your dog is becoming increasing popular.

Some interesting research was done by a previous winner of the most dog friendly town award, Melton Mowbray. They found.

– “Those who own dogs are almost twice as likely to regularly visit local shops and businesses that welcome dogs”, “Four out of five businesses who opened their doors to dogs say that they noticed an improvement”, “72% of dog-owners said they would holiday in the UK more frequently if there were options for their dog” and “96% of people said the atmosphere notably improved when dogs were present”

To enter the competition, businesses just need to register on the DogFriendly website www.dogfriendly.co.uk and then ask their customers, friends and partners to vote for them by sharing their nomination by social media, e-mail or word of mouth. The competition culminates in an exclusive Awards ceremony in London in October where the finalists, press and dog friendly businesses will be invited to find out who has won each Award category.
Last year 2,200 businesses and places were nominated and 36,000 votes were cast. This year is set to be even bigger.

The Awards are in association with Eurotunnel and the Pets at Work Alliance with the support of other partners. Nominations and votes close for the Awards on 30th September.

Formed in 2003 by husband and wife team Steve and Linda Bennett, Dogfriendly is the largest online and in print database of places where dogs will be made as welcome as their owners