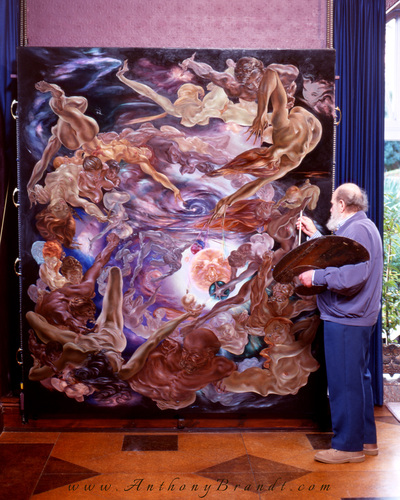 The male nudes neither bow down to nor dominate the females; rather they embrace them. Male and female nudes play an equal part

Editors, Journalists & Press Photographers are invited to a Champagne Reception on Saturday June 20th 2015, for the first ever viewing of the entire works of ‘Britain’s Last Great Contemporary Classical Artist’, Anthony Brandt (1925-2009). This event will take place in the grand gardens and renovated Chapel which Brandt used as his artist studio and home. This is a celebration of Anthony Brandt’s beautifully provocative paintings, sculptures and prints worth millions.

Interview opportunities will be available during the Event with celebrity guest(s), and the host George Keppe, life-long friend of Anthony Brandt.

If you wish to attend this first ever viewing of the entire Anthony Brandt collection, please contact: Dorothy at info@dotpr.co.uk with the number of Press invitations required. We will send you details of the location & directions with the Invite/s. We look forward to hearing from you and meeting you on June 20th; the earliest replies will have priority.

Request: This is a private, invitation only event, so we kindly request that you do not publish the 'Event Details' until after June 20th. However please feel free to publish the related Story 'Death of Society Beauty Uncovers Art Hoard Worth Millions' in part or full, prior to the event. If published please contact Dorothy on info@dotpr.co.uk with a publication date or link, for our files.

Now, finally the world can appreciate the work of Anthony Brandt who has justifiably been described as ‘Britain’s Last Great Contemporary Classical Artist’.

As noted above, this is a Private, Press Only, Opening/Viewing, so we kindly request that you please do not publish the 'Event Details' until after June 20th. However please feel free to publish the related Story 'Death of Society Beauty Uncovers Art Hoard Worth Millions' in part or full, prior to the event. If published please contact Dorothy on info@dotpr with a publication date or link, for our files.