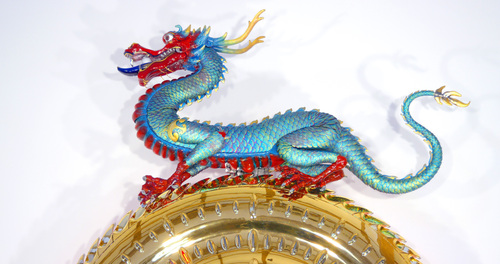 It would be brilliant if the Dragon Chronophage could have a similar effect on one of the major Shanghai universities, such as Jiao Tong University.

The clock will be on sale at the event and its presence in Shanghai reinforces the city’s link with the renowned university city, Cambridge.

The Corpus Chronophage, the first clock of its kind and predecessor to the Dragon Chronophage, is displayed in an exterior wall of Corpus Christi College, Cambridge.

Dr Taylor donated it to Corpus Christi, his alma mater, in 2008, and as a consequence the clock will be seen, in the future, as a part of the university’s rich history.

The University of Cambridge, founded in 1209, is the UK’s second oldest university.

Jiao Tong University, founded in 1896 as Nanyang Public School, is China’s second oldest institute of higher learning, and like Cambridge, is one of its country’s most prestigious universities.

“It would be brilliant if the Dragon Chronophage could have a similar effect on one of the major Shanghai universities, such as Jiao Tong University.”

Dr Taylor knows China well, having done business in Hong Kong in the 1960s and having set up a factory in Guangzhou, Guangdong Province in the 1980s.

The Dragon Chronophage was designed in tandem with one of China’s leading authorities on art: Professor Long of the China Academy of Art, Hangzhou.

As an authentically Chinese piece of art, it will complement Shanghai in the same way that the Corpus Chronophage complements Cambridge.

The clock, a homage to the brilliance of Chinese design, is valued at over £3 million (around RMB29 million), making it one of the world’s most valuable modern clocks.

The popularity of the Corpus Chronophage as a public piece of art shows the appeal of these unique timepieces. Soon the Dragon Chronophage will also be performing to fascinated crowds at Design Shanghai.

The Dragon Chronophage (Ancient Greek for ‘time eater’) is designed to make reference to Einstein’s theory of ‘relative time’ and speeds up, slows down and even stops, reflecting the fact that our perception of time can change depending on our activity. The clock is correct every fifth minute.

The clock externalises the ‘grasshopper escapement’ developed by the groundbreaking eighteenth-century English clockmaker John Harrison; it aims to increase public awareness of the importance of the ‘grasshopper’ and other pioneering Harrison inventions to humanity as a whole.

The Dragon Chronophage is the third that Dr Taylor has created, and is a homage to the brilliance of Chinese design.

ORGANISER – MEDIA 10
Founded ten years ago Media 10 Limited is the most decorated media and events company in the UK.

In the ten years the company has been running, the company has seen its turnover, profits, portfolio and staff numbers grow at a dramatic rate and it now has over one million visitors in attendance at Media 10 events and its publications have over three million readers.