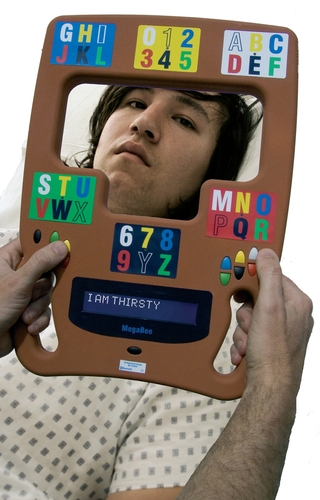 Locked-in syndrome (LIS) has recently come to the public attention, courtesy of the film and book ‘The Diving Bell and the Butterfly’ – the story of the French journalist, Jean-Dominique Bauby, who was afflicted with the condition after a massive stroke. Whilst LIS is comparatively rare, one of its major consequences, the inability to communicate effectively, is shared by victims of severe stroke, late stage motor neurone disease, multiple sclerosis, cerebral palsy and extreme spinal trauma.

In cases where the patient can neither speak nor write legibly, either due to the effects of the illness or because they have to be ventilated, the inability to converse is a major problem to life quality. Frustration from being unable to express basic needs and depression due to boredom are major barriers to coping with such illnesses.

In these cases eye movement becomes the most versatile...