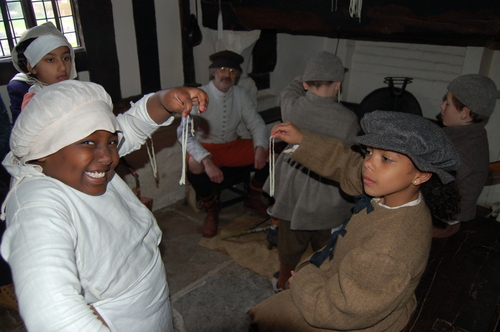 Teachers in more than 2,500 primary schools across the UK have embraced the opportunity to introduce Shakespeare into their classrooms

The creativity that Shakespeare can inspire in our children is one of the most valuable ways we can equip the next generation with the tools they need for modern life. That is the view of the Shakespeare Birthplace Trust, which next week launches the first ever Shakespeare Week - a UK-wide campaign that aims to give every primary school age child a fun and fascinating experience with Shakespeare.

Shakespeare’s cultural legacy is universally acknowledged; he wrote some of the world’s greatest stories, offers insight into life’s big questions and guides us through the emotions and consequences that go with them. However, the charity has identified that the post-baby boom generation has missed out on the creative power of Shakespeare. While Shakespeare’s popularity grows around the world, in the UK adults in their 30s and 40s, many of whom are now parents themselves, feel no connection with this aspect of their cultural heritage, often due to negative experiences studying Shakespeare as an exam text.

The Trust’s campaign to inspire primary schools to introduce Shakespeare also has ambitions to bridge the generation gap and encourage parents to re-visit Shakespeare through the eyes of their children.

Teachers in more than 2,500 primary schools across the UK have embraced the opportunity to introduce Shakespeare into their classrooms. To date more than 20,000 free resources have been downloaded from the Shakespeare Week website for use in every subject, from scientific experiments and nature studies, to preparing a Tudor banquet, film-making and acting out scenes from one of the bard’s plays, the most popular being Macbeth.


Here’s an example of what six schools are getting up to during Shakespeare Week:
King James’ School, Huddersfield: History, geography, maths and technology subjects are all being embraced during Shakespeare Week, including making Tudor food, doing a web-quest, making leather purses, counting using Roman numerals, understanding Tudor Geography and making and writing with quill pens on paper which will then go into a Horn Book.
Brockenhurst CE Primary School, Hampshire: Children from Brockenhurst will be rewriting Shakespeare’s Romeo and Juliet into rhyming couplets to perform in front of a green screen, which will transport them to the realm of Shakespeare’s Globe in London. A video of the performances will be broadcast to parents as part of a red carpet event, where the children are the VIP guests.
Seanburn Dene Primary School, Sunderland: Children in Sunderland will be rehearsing and performing a musical version of Macbeth and exploring the theme of fairies and fantasy through workshops based on A Midsummer Night’s Dream. Younger classes will be joining in too by learning Tudor nursery rhymes and watching the 2011 film, Gnomeo and Juliet.
Alveston CE Primary School, Stratford-upon-Avon: A special Shakespeare Week assembly will see children across all year groups learning Tudor dancing and acting out scenes from the plays. Classes will also be learning about cooking in Shakespeare's day and getting to know some of the playwright's most famous characters.
St Richard’s RC Primary School, Manchester: The Year 2 class at St Richard’s is staging a fairy party inspired by A Midsummer Night’s Dream and junior classes will be performing scenes from various Shakespeare plays and creating artwork to further explore the stories.
Sutton Bonington Primary School, Loughborough: As part of their celebrations, children in Loughborough will be getting to know some of Shakespeare’s funniest characters including Bottom, Flute and Snout. Pupils will hear more about the world’s most famous playwright at a special assembly and will also be making their own Shakespeare inspired puppets.

School children taking part in Shakespeare Week at school are given a passport to continue their Shakespearian journey with their schools and families at UK theatres, museums, libraries, galleries and historic sites. 150 organisations are supporting Shakespeare Week, from The National Trust and British Museum, to the new Atkinson Arts Centre in Southport and Seven Stories National Centre for Children’s Books in Newcastle Upon Tyne. The British Dental Health Foundation is supporting the campaign with resources for schools and stationery retailer, Paperchase has launched a Shakespeare-inspired postcard design competition and is supporting events at the five Shakespeare family homes during Shakespeare Week and the Easter holidays.

Jacqueline Green, head of learning and participation at the Shakespeare Birthplace Trust said, “Many people think that Shakespeare is a world away from their own lives and the text beyond most abilities. Our aim is to change that perception, because we believe that everyone, no matter what age, who you are, where you’re from, will have something to gain from watching, performing or reading the work of Stratford’s extraordinary playwright and
and poet. Children have boundless imagination and creative potential, and we hope the fun they will have during Shakespeare Week will be truly infectious and inspire families to explore further together.”

The first ever Shakespeare Week is supported by Arts Council England (ACE). By 2016, the campaign aims to have more than half of Britain’s primary schools taking part, involving at least three million children in Shakespeare Week.

Images: Photos
B-Roll Film: Access to filmed performances
Digital Theatre Plus is making its entire back catalogue of filmed Shakespeare performances free of charge to primary schools during Shakespeare Week. Media access to the following content is also available in HD as a download for producers if they choose to use it:

David Morrissey in Macbeth - "Is this a dagger which I see before me?". Act 2, Scene 1.http://www.youtube.com/watch?v=k7hiy2vi2wg

Much Ado About Nothing - David Tennant's arrival. Act 1, Scene 1.
http://www.youtube.com/watch?v=Dv6I_07pT6Q

Much Ado About Nothing - David Tennant monologue. Act 2. Scene 1.
http://www.youtube.com/watch?v=UNIQm7vEa2o

Notes to editors:
The Shakespeare Birthplace Trust was awarded 150,000 British pounds from the ACE Renaissance Strategic Fund to support the first two Shakespeare Weeks in 2014 and 2015.