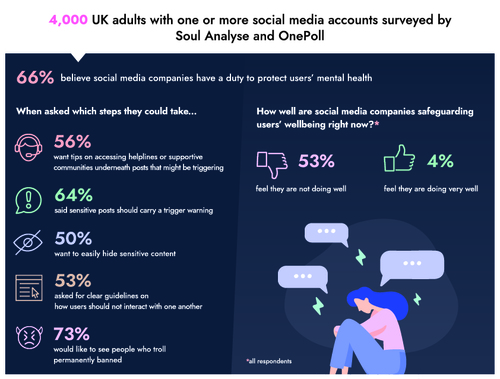 Two thirds of UK adults with a social media account believe social media companies have a duty to protect the mental health of people who use their platforms, according to new research.

4,000 people were surveyed by wellbeing company Soul Analyse and OnePoll, focusing on social media use during the pandemic.

When asked which steps social media companies could take, over half (56%) of those calling for mental health protection felt platforms should suggest tips on how to access helplines underneath posts that might be triggering, or point towards relevant communities that can offer support.

64% said sensitive posts should carry a trigger warning, while half wanted to be able to easily hide sensitive content. Clear guidelines on how users should not interact with one another (53%) also ranked highly.

Almost three quarters (73%) said they would like to see people who troll permanently banned.

Overall, the study found that 53% of respondents feel social media platforms are not doing well when it comes to safeguarding the wellbeing of users, contrasted with only 4% who feel they are doing very well.

In the wake of proposed regulation to hold technology companies accountable for harmful content on their platforms, and the UK Government’s recent appointment of Love Island’s Dr Alex George as its first Ambassador for Mental Health, just over a third (36%) said social media companies should look to the Government for guidelines on how to deal with potentially harmful content online.

“Our research shows people have been turning to social media more frequently throughout the pandemic - 48% say the time they spend browsing has increased since the first lockdown began in March 2020. Over two thirds (67%) of these are now spending up to an hour more on social media per day and a further 18% are spending up to two hours extra,” said Stephanie Dunleavy, founder of Soul Analyse. “The majority of social media users clearly feel platforms must play their part in creating a healthy online environment. Social media companies could introduce a ‘conduct agreement’ box for people to tick each time they log on, which may help to deter trolls.”

A third of people surveyed said using social media throughout the pandemic had caused them to experience negative emotions, with news about Covid-19 (65%) and information that might not be true (54%) topping the list of content making them anxious, sad or fearful.

However, this was outweighed by those who felt positive emotions when scrolling through social media (44%). 64% credited seeing optimistic posts as the main reason for feeling happy or calm, and a further 60% responded well to being reminded of the sentiment that ‘everyone is in this together’.

When asked how using social media had made them feel in general during the pandemic, ‘connected’ was the top answer (40%). Overall, more people reported experiencing positive feelings (57%) than negative ones (38%).

The research found that 60% of UK adults with one or more social media accounts spend, on average, up to two hours per day on social media platforms.


About Soul Analyse
Soul Analyse is a wellbeing brand, encompassing a positivity blog and jewellery line. The blog began in 2015 and attracted 50,000 people reading bite-sized insights into positive thinking. The company launched its ‘I AM’ jewellery range in 2016 and has since built a £1m business. The range now features hundreds of products. Forbes magazine has featured Soul Analyse as a ‘one to watch’ start-up.