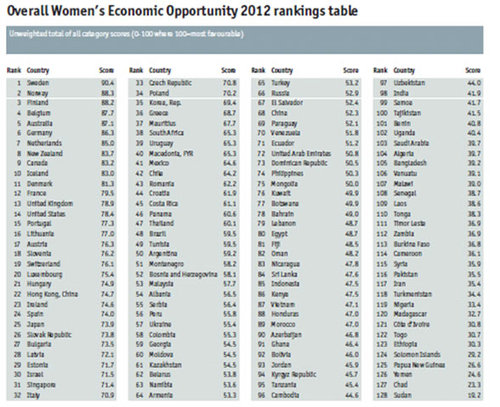 LONDON: Tuesday March 6 2012: Emerging markets have taken noteworthy steps in advancing opportunities for women in the past year, according to the Economist Intelligence Unit (EIU). This is one of the conclusions of the Women’s Economic Opportunity (WEO) Index 2012, which measures specific attributes of the environment for women employees and entrepreneurs in 128 countries. In Kenya, the government enacted new policies mandating equal pay for equal work and made sexual harassment in the workplace illegal. Saudi Arabia also made a small but significant gain in labour policy with a ministerial order that, for the first time, fully articulates the principle of equal remuneration for men and women. Other key findings include Bolivia’s increasing political will to eliminate discrimination, especially against indigenous and rural women, and Cambodia’s provision of skills training and micro-credit.

Commissioned and funded by Vital Voices Global Partnership, La Pietra Coalition, ExxonMobil, the New Zealand Aid Programme and the European Bank for Reconstruction and Development, the WEO Index looks to assess the laws, regulations, practices, and attitudes that affect women around the world.

The dynamic, quantitative and qualitative scoring model aims to look beyond gender disparities to the underlying factors affecting women’s access to opportunity in the formal economy. Twenty-nine indicators, selected and validated by a panel of international development and gender experts, were assembled into five categories: labour policy and practice; access to finance; education and training; women’s legal and social status; and, general business environment. Together, they evaluate every aspect of the economic and social value chain for women, from fertility to retirement.

The 2012 Index, the second, added and expanded indicators to allow for deeper analysis into important areas such as the prevalence of modern contraception, political participation and access to technology and energy. Fifteen new countries – seven Pacific Islands and eight from Eastern Europe and Central Asia – were added to provide greater geographical coverage.

• Little change over the past year at the top and bottom of the Index. Sweden and Norway, with strong, gender-sensitive legislation and progressive cultural norms, remain at the top, while Chad and Sudan, which have scarce legal, educational and financial resources for women, stayed at the bottom.
• Lithuania and the Slovak Republic tied for the most improved score – an increase of 7.2 points – with gains in multiple areas.
• The United States – alone among industrialized countries – does not have federal laws in place to mandate paid maternity leave.
• Pakistan passed the Anti-Women’s Practices Bill, making acid attacks against women illegal for the first time. The crime is now punishable with a minimum of 14 years in prison.
• In Sub-Saharan Africa, female labour participation averages a relatively high 61% across the region. Also promising is the adoption of the Protocol to the African Charter on Human and Peoples’ Rights on the Rights of Women in Africa. It asserts women’s rights to take part in the political process; to enjoy social and political equity with men; and to control their reproductive health.

The report findings and insights are valuable tools for government and business. With waning economic growth, growing skills shortages and intensifying global competition, bringing trained women into the workforce is an economic imperative.

"Our partners in this index all understand that women as producers, consumers, entrepreneurs and employees are critical to the growth of the global economy today, said Alyse Nelson, President and Chief Executive Officer of Vital Voices. “For those decision makers in business, media, academia and the government this is not just a unique analysis of the global economic landscape facing women in 128 countries. But also a critical tool to deepen their understanding of those underlying factors affecting women's access to economic opportunity in the formal economy. "

"We've tried to go beyond other gender studies by looking at unique aspects of the environment for women," said Leo Abruzzese, EIU's Global Forecasting Director. "Analysing conditions in the labour market, as well as measuring the availability of childcare and maternity leave, is a challenge, but it paints a clearer picture of the conditions women are facing."

The Women’s Economic Opportunity Index 2012 is available free of charge at: www.eiu.com

About the Economist Intelligence Unit

The Economist Intelligence Unit (EIU) is the world's leading resource for economic and business research, forecasting and analysis. It provides accurate and impartial intelligence for companies, government agencies, financial institutions and academic organisations around the globe, inspiring business leaders to act with confidence since 1946. EIU products include its flagship Country Reports service, providing political and economic analysis for 195 countries, and a portfolio of subscription-based data and forecasting services. The company also undertakes bespoke research and analysis projects on individual markets and business sectors. More information is available at www.eiu.com. The EIU is headquartered in London, UK, with offices in more than 40 cities and a network of some 650 country experts and analysts worldwide. It operates independently as the business-to-business arm of The Economist Group, the leading source of analysis on international business and world affairs.