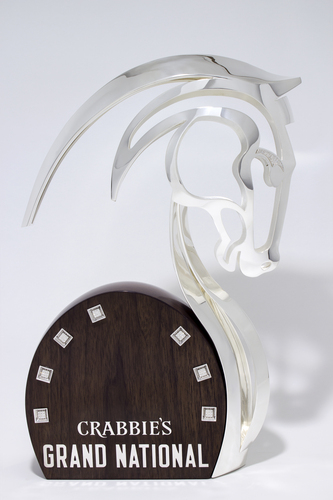 The 2014 Crabbie’s Grand National Festival features a record £1million purse and the new trophy has been designed to usher in a new era for the world’s greatest steeplechase.

Designed by the British Fine Jeweller Boodles, in partnership with Crabbie’s, this year’s trophy showcases an angular, minimalistic design in the form of a horse’s head, reflecting the modern approach that Crabbie’s will bring to the 2014 Grand National Festival. With a walnut stand and over 2,000 grams of sterling silver, both featuring clusters of 5.21 carat diamonds, the bold design has been brought to life using only the finest materials and craftsmanship.

Peter Eaton Snr., Deputy Chairman at Halewood International said: “As the new title sponsor, we commissioned the design of this trophy with the aim of being completely different to previous years. Having won the Grand National ourselves in 2004 with Amberleigh House, we wanted to have a completely new style of trophy to hand over to the winner in our inaugural year as title sponsor. This trophy is one way we are looking to put the Crabbie’s mark on the world’s greatest steeplechase.”

Michael Wainwright, managing director of Boodles said: “We are delighted to have designed a stunningly different trophy for this year’s sponsor Crabbie’s who, like Boodles, also have their head office in Liverpool. This year’s trophy, incorporating diamonds, demonstrates the contemporary design and fine craftsmanship that we are known for today.”

Crabbie’s Alcoholic Ginger Beer is made from a unique recipe that has four secret ingredients, which coupled with the steeped ginger, give the drink its sparkle, crispness and its uniquely ginger and refreshing difference.