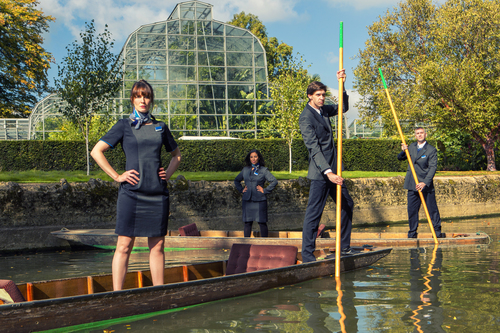 Customer Service Ambassadors Kat Cox, Shaun Dawson and Ahlam Ajjot joined Station Manager Rob Munday to provide the enjoyable morning punt for passengers, allowing them to put their new uniform, which has been designed by Jermyn Street Design, to the test.

The line is the first new rail link between a major British city and London for over 100 years and will bring significant social, economic and environmental benefits to those living and working in Oxfordshire and commuting to London. Tickets between Oxford Parkway and London Marylebone start from as little £6 and the journey time from Oxford Parkway to London Marylebone will be from under an hour.

Jennifer Payne, Customer Services Director at Chiltern Railways, said: “The new Oxford Parkway to London line is a historic moment for Oxfordshire and our £130 million investment in the new line proves our commitment to the economic development of the area. The new uniform is classic yet fashionable with a quirky twist and testing its durability on the river gave us the opportunity to say, “Watch out Oxford, Chiltern are coming.” It’s just days until the launch of the new line from Oxford Parkway on 26th October and we’re looking forward to welcoming our first customers.”

Rebecca Rhoades, Designer at Jermyn Street Design explains the inspiration for the new look: “We were determined to move away from a conventional uniform and we also wanted to combine a classic and elegant style with something eye-catching. We therefore introduced a contrast colour in the suiting, detail right down to the cuff stitching, which everyone loved from the very start.”