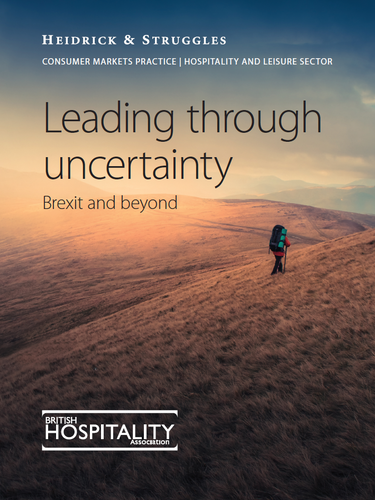 • More than half (55%) of hospitality and leisure sector leaders are ‘concerned’ about the state of the economy.
• The cost of food imports is a particular worry, with consumers having not yet felt the impact of these rising costs on their bills.
• One in ten (10%) think that business confidence is much worse now compared to previous years.
• Talent remains the biggest long-term challenge, with a million job shortfall predicted post-Brexit by 2029.

LONDON, 5 June 2017 – The hospitality industry is facing a perfect storm, with more than half of business leaders concerned about rising costs, the employment picture, security, and the sustainability of consumer confidence.

Heidrick & Struggles (Nasdaq: HSII), a premier provider of executive search, leadership consulting and culture shaping worldwide, spoke to Chairmen and Chief Executives from some of the biggest organisations in the industry, representing businesses with revenues of over £40 billion and employing more than a million people across the UK. While views on their specific business or sector could vary, the overarching theme was one of significant concern.

The report by Heidrick & Struggles, in partnership with the British Hospitality Association, found a range of issues worrying industry leaders. Most notably, rising costs are high up the agenda, with the fall in the pound following Britain’s decision to leave the EU having a huge impact on the cost of key imports that is yet to be felt by consumers. One CEO complained about the cost of butter, with an increased cost to her business of 46%, while another was seeing meat costs rise by 29%. This will mean higher bills for diners and holidaymakers, but according the majority of CEOs, consumers are yet to react negatively to price rises because the majority of these costs are yet to hit them.

Businesses in the sector are anticipating a recruitment gap of over a million jobs by 2029, according to a report by the BHA and KPMG earlier this year, which would mean the industry would need to recruit 60,000 UK workers in addition to sustained recruitment of 200,000 more per annum to meet the demands of growth. Filling these openings would likely be impossible without hiring migrant workers. Firms are heavily reliant on European workers, with half of CEOs reporting their workforce as 25-50%European, with more than a third of those businesses hiring EU citizens to fill 50-75% of their workforce.

According to the report, post-Brexit the hospitality industry pay bill will increase by £1.4 billion in the first year, and could rise by just over £1 billion a year over three years, amounting to a total cost of £3.2 billion. Wider economic changes are also adding to the pressure for the hospitality and leisure sector as business rates rise, and the apprenticeship levy and pensions auto-enrolment begin.

Ben Twynam, Partner at Heidrick & Struggles, said: “We have seen real concern from the most senior people across the hospitality industry, not only about talent and other Brexit-related concerns, but due to a number of headwinds facing the industry. With the cost of imports continuing to rise, increasing prices for customers and an expectation of decreasing consumer confidence in 2018 and 2019, there are a number of challengers facing businesses across the sector. While industry leaders are relatively confident about the remainder of 2017, they are far more pessimistic about the two years thereafter, when the real impact of Brexit will come to fruition.”

Ufi Ibrahim, the chief executive of the British Hospitality Association, said: “It is no exaggeration to say that hospitality and tourism face a perfect storm which is well articulated by our industry’s top executives in this report – a looming recruitment crisis caused by cuts to come in EU immigration, rising costs on both materials and labour, increased business rates and a tax regime that favours our European competitors. We have been urgently discussing these matters with the last government and will do so with the next. Our 10-year strategy to encourage more UK workers into the industry has been well received and we have confidence that with government support we can continue to grow what is the fourth largest industry in the UK.”

The hospitality and leisure industry is the fourth-largest employer in the UK, with 4.5 million people working in more than 180,000 businesses across the country.

Heidrick & Struggles’ Hospitality & Leisure team knows that securing the right talent is a critical success factor in this fiercely competitive industry. We also have learned that the future success lies in not just delivering, but developing leaders.


About the British Hospitality Association
The British Hospitality Association acts as a voice for 40,000 hospitality and tourism businesses, championing the interests of the whole industry and lobbying government to pursue policies that enable its members to thrive. Benefits include free advice and expert guidance on regulation, finance and health and safety as well as valuable savings on services from selected business partners.
Its members range from small, independent restaurants to major names in the industry including leading hotel, restaurant and pub chains, visitor attractions, serviced apartments and hospitality venues.
The hospitality and tourism industry is the UK’s fourth largest employer, employing 10% of the workforce in 180,000 businesses.

What does the BHA do?
• Digital agenda: it has responded to the growth of the sharing economy and the rise of digital by campaigning for transparency on intermediary websites and regulation of Airbnb hosts and by advising the industry on data and online protection.
• Competitiveness: it is championing the Cut Tourism VAT campaign, and campaigning on visa reform and airport expansion.
• Up-skilling Britain: it promotes young talent through initiatives such as Hospitality Works and the Big Hospitality Conversation.
• Responsible hospitality: it is lobbying on carbon reduction and providing advice on sustainable practices as well as campaigning and advising on nutrition, hygiene and allergen labelling. It has taken the lead as the primary authority on regulation across the industry.
• Economic engine for growth: it is working with government on its five point plan to boost tourism across the UK and lobbying on fiscal and economic policy. It is lobbying local enterprise partnerships to champion investment and growth reforms.
• Employment legislation: lobbying the Treasury and Low Pay Commission to reduce the impact of the National Living Wage, and working to improve and extend apprenticeships.