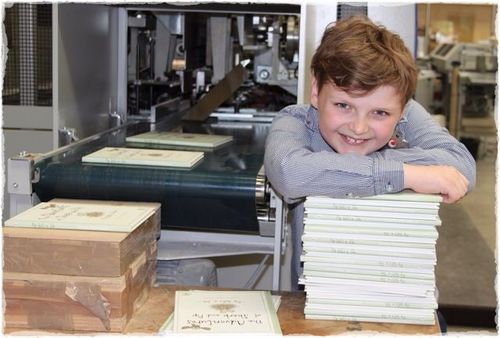 30 November 2016, London – Schoolboy author and entrepreneur Henry Patterson hopes to see his children’s story turned into an animated series after signing a deal with a leading TV animation company.

Rights to the story have been acquired by KidsCave, an intellectual property development and production company that is currently making a high profile animated series for Netflix and CiTV.

Henry, 12, wrote The Adventures of Sherb and Pip when he was nine. The story is about an owl and a mouse who live in a sweetshop and a large supporting cast of other animal characters including Vera the Vole, Martha Mole and the mysterious Billy the Cat.
Henry said: “I grew up watching cartoons and it’s amazing to think that my stories might be turned into shows for other children. I have done readings of my book for children at schools and bookshops but this will be like seeing it come to life.”

Co-founder of KidsCave Andrew Baker said: “We look for original, engaging stories that are told in an authentic voice. Henry is not a grown-up writing books for children and his imagination hasn’t been coloured in by years of reading and TV so his ideas are fresh and interesting.

“We’re really excited to work with him on this project.”

Henry Patterson has made headlines since the age of 10 when he was dubbed “Britain’s youngest entrepreneur”. Henry is the creative force behind Not Before Tea www.notbeforetea.co.uk, a company that started selling a range of imaginatively packaged sweets before moving into children’s gifts based on characters from his storybook The Adventures of Sherb and Pip.
Henry’s adventures in business have been featured by the BBC, The Sunday Times, Forbes magazine and many others as far afield as China and Australia. This year he was a keynote speaker at Retail Week Live. His other speaking engagements in the UK and abroad include Lego, Clarks and Avarto.

About KidsCave
KidsCave Entertainment is an independent development and production company co-founded by CEO and Creative Director Ed Bignell, an award winning and BAFTA nominated animation director, and CEO Andrew Baker, one of the UK’s leading commercial and business affairs advisors.

Based in London, KidsCave Entertainment develops globally appealing, character based children’s entertainment properties that are conceived and executed with a fully transmedia approach - storyworlds that integrate through television, film, publishing, online, games and toys. KidsCave is currently in production on ROBOZUNA - an original project created by Ed Bignell and developed by KidsCave Entertainment, and produced in the UK and Canada for CITV and Netflix.

Schoolboy entrepreneur and founder of children’s brand Not Before Tea, Henry launched Young and Mighty, his book and accompanying online platform for young entrepreneurs in 2018.