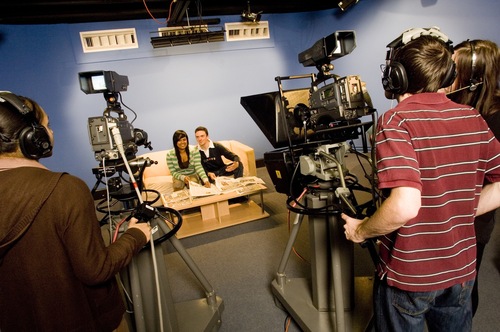 The world of journalism is changing fast with the rise in online media and swift advances in digital technology making this an exciting time to start training and working in the industry.

Highbury College, Portsmouth is an education provider that prides itself on its ability to move with the times, offering journalism courses that are tailored not only to meet industry standards, but to push the boundaries of excellence.

According to figures released by the National Council for Training of Journalists, Highbury College offered one of the UK’s top ten journalism courses at further education colleges for 2007. This is a major achievement for the College and they aspire to be in the top five by 2010.

As an institution it has an exceptional reputation for turning out highly successful journalists and many ex-students are now household names including ITN’s Mark Austin, BBC Political Correspondent John Pienaar and former president of CNN, Chris Cramer.

For those looking for a career in journalism, there could not be a better place to start as the College offers four main foundation qualifications: Newspaper Journalism pre-entry, Magazine Journalism, Broadcast Journalism and a Foundation Degree in Media Practice.

These are full-time courses, validated by relevant industry bodies which assess the courses for quality and effectiveness, letting employers know that they can expect the best from graduating students.

The Magazine Journalism, Newspaper Journalism pre-entry and Broadcast Journalism courses take only 20 weeks to complete and cover key skill areas, such as media law and public affairs as well as technical production skills.

The Foundation Degree in Media Practice allows students to learn at the College and pay much lower fees than at a university, with the prospect of direct entry onto an Honours Degree or even going straight into employment.

The College has developed strong links with the newspaper, television and radio industries and an encouraging number of editors and guest speakers, such as freelancers and senior journalists, visit the College on a regular basis, sharing their knowledge with students and providing valuable insights into the potential careers available to them.

Peter Moutray, Head of Media and Journalism at the College, said: “On the Broadcast course we have editors coming in to run news days with the students so they are familiar with how things are run. After leaving Highbury, students can go into a news room and be useful employees from day one.”

Paul Hankey, 20, who completed the Foundation Degree in Media Practice before moving into a career in radio, said: “I think it gives you a more hands-on approach. Instead of writing essays about it you get to produce something yourself. All the skills I got from the course I regularly use in my everyday work, from digital imagery to video editing and audio editing.”

Students have the enviable opportunity to produce their own radio shows, presenting their work during agreed midday and drive-time slots.
It is no surprise the success rates on the courses are so high. The last Foundation Degree in Media Practice course saw a 100% success rate and hopes are high for the graduating students on the other courses.

Course syllabuses are flexible and frequently changing in order to meet the demands of an ever-evolving industry.

The Newspaper Journalism course, which has just been accredited by the National Council for Training of Journalists (NCTJ) for a further three years, is currently undergoing several new improvements to help prepare students for the new digital and online era.

New students will be given an introduction to video cameras and editing from week one and will be taught how to write successfully for the web.

The college’s outstanding reputation is no longer limited to the UK as this year, Highbury College staff embarked on an exciting new venture, travelling across continents to be guests at the fifth African Film and Television Expo (BOBTV), held in Abuja, Nigeria.

During their stay, the group delivered a number of workshops and held high profile talks with television and radio industry leaders.
As a result of the trip, 45 employees from African Independent Television will be arriving for training at the College over the next year, with more to follow.

Course lectures and productions all take place in industry standard media suites with modern facilities and equipment.
But new arrivals to the College will soon benefit from facilities being built at the £37.5m Highbury College Campus, which will be of the highest standard and furnished with the newest advances in media technology.

“It is a priority for us that the students have access to the best most up to date equipment,” said Peter.

“The new build is going to give us high definition television studios, digital radio studios and modern digital news rooms.”

Highbury College is an institution that has proved its dedication to education and training, from the first-class service delivered to employers and students, to the extensive plans for the future.

The impressive new facilities will no doubt secure Highbury College as the destination of choice for budding journalists.

For more information or to apply for a course at Highbury College, please call Alex on (023) 9231 3373 or visit the website at www.highbury.ac.uk.