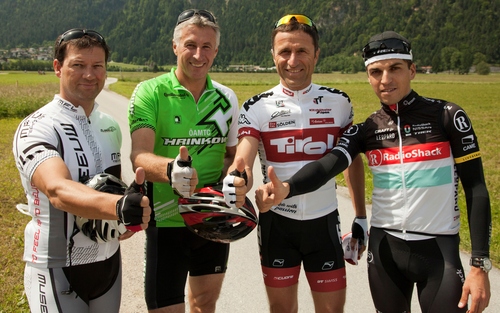 Having hosted the first Youth Winter Olympic Games in Innsbruck earlier this year, the Tirol cycle team will mark the Olympic journey from Innsbruck 2012 to London 2012 by bike.

Over a total of 8 days, the team of 20 cyclists will cover a total of 1300 miles, raising money for Disability Snowsport UK (DSUK). The Olympic spirit will connect Innsbruck and London in 2012 as they become the only two cities in the world to host the Olympics for the third time (i).

Starting from the bridge over the Inn River in Innsbruck on Thursday 19th July, the team reaches Tower Bridge in London on Thursday 26th July. The route will cover eight stages through Germany, Luxembourg and Belgium and by ferry to Ramsgate before reaching Tower Bridge. The riders will spend 6-8 hours a day on the road covering approx. 120 – 200km per day. Tower Bridge is the obvious finishing line for the ride due to its close proximity to Trinity House, which will become the Austria House Tirol during the Olympics and the official home of the ӦOC (Austrian Olympic Committee).

Josef Margreiter, CEO Tirol Tourist Board, says “We nominated Disability Snowsport UK (DSUK) as our chosen charity as we believe strongly in their vision that skiers and boarders with a disability should be able to ski or board alongside the able bodied as equals at all snowsports facilities and resorts. We have set up a justgiving page and hope many people will donate to such a good cause”.

The final UK leg from Ramsgate to Tower Bridge will take place on Thursday 26th July. For the last 90mile stretch the Tirol cycle team will be joined by some famous sport personalities, including BBC Ski Sunday presenter Graham Bell, ex GB ski racer Konrad Bartelski, some UK cycling clubs and teams and cycling enthusiasts from the Ski Club of Great Britain, Crystal Ski and Snow magazine, all helping to raise funds for DSUK.

Josef Margreiter, Stephan Eberharter and Leonhard Stock were in training earlier this month and gave their thoughts about the forthcoming cycling challenge and what it means for Disability Snowsport UK. The short video is available here