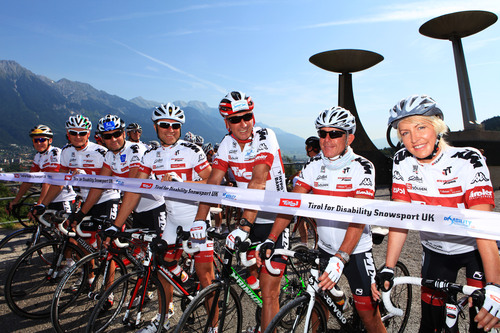 We wanted to connect with the true spirit of the Olympics and assisting a British charity seemed a positive way for the Tirol to show our support.

Bergisel, Innsbruck. This morning, a team of 20 cyclists from the Austrian Tirol has begun their Charity Cycle Ride from Innsbruck to London for a British charity, Disability Snowsport UK (DSUK).

Over the next 8 days the Tirol cycle team will ride 1300km through Germany, Luxembourg and Belgium before crossing from Ostend to Ramsgate. Spending an average 6-8 hours on the road and covering up to 200km per day, they will arrive at Tower Bridge in London on Thursday 26th July, the day before the Olympics Opening Ceremony. This will also coincide in with the official opening of the Olympic hospitality house, Austria House Tirol, at Trinity House.

Supporting the Tirol cycle team at the start was Heather Mills, hopeful for the Paralympic Games in Sochi 2014 for the British Disabled Ski Team, who joined them as they set off from the Bergisel stadium. The final stage in the UK from Ramsgate to Tower Bridge, London on Thursday 26th July will be joined by famous British sport personalities, including BBC Ski Sunday presenter Graham Bell, ex GB ski racer Konrad Bartelski and cycling enthusiasts from the Ski Club of Great Britain, Crystal Ski and Snow magazine, all helping to raise funds for DSUK.

The charity cycle challenge was initiated by Josef Margreiter, CEO Tirol Tourist Board, ‘We wanted to connect with the true spirit of the Olympics and assisting a British charity seemed a positive way for the Tirol to show our support. Disability Snowsport UK (DSUK) is a fantastic cause and we truly believe in their vision that snowsports should be accessible to all, regardless of any disability .’

The journey from Innsbruck to London is an important link for Tirol in strengthening their position within the Olympic Movement. Innsbruck hosted the inaugural Youth Olympic Games earlier this year and with London hosting the Summer Olympics, they become the first two cities in the world, and in the same year, to host the Olympics for the third time. The Tirol Tourist Board will be present throughout the London Olympics at the official Austria House Tirol, Trinity House. On Tuesday 31st July there will be a special presentation of the cheque to Disability Snowsport UK from the money raised offline in Austria, Germany, Belgium and also here in the UK via the justgiving page.

Follow the progress reports and story as the team cycle through Europe on Facebook. Donations can be made at www.justgiving.com/tirol2london2012.

Notes to Editors
(i) Since 1997 the Tirol Tourist Board has run a dedicated website ‘Without Barriers’, providing comprehensive and sensible advice on resorts for visitors with a disability. Tested by a panel of mobility-impaired outdoor experts the site lists suitable accommodation, ski areas, activities including hiking and handbike routes in summer or adaptive cross-country ski trails in winter.