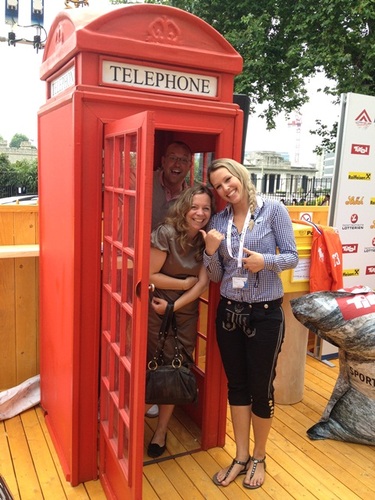 The contest to host the best national hospitality house is hotting up, with Austria House Tirol looking for a podium finish

Aside from the athletes competing for Olympic Gold, there is another passionate quest for Olympic glory taking place right now in London. The contest to host the best national hospitality house is hotting up, with Austria House Tirol looking for a podium finish after the immensely successful Snow Day and Après-ski party. The recent trend of hospitality houses showcasing their nation to the public is relatively new, although the concept behind the houses has been around for some time. Traditionally, Hospitality Houses were there to host athletes, media and VIPs but in recent years have evolved to become a platform for nations to highlight their own culture and tradition.

The Snow Day and Apres-ski party at Austria House Tirol on Sunday 29th July was a huge success, with over 1000 visitors through the doors during the day. Word spread like wildfire across the nations as TV crews from America, France and Croatia came by to capture some of the action and join in the fun. The event kicked off with a morning weather report from ITV weather presenter Lucy Verasamy, who forecast snow, yodelling, thigh-slapping, food, drink, apres-ski atmosphere and true Tirolean ‘Gemütlichkeit’; the Austrian word for hospitality.

It wasn’t long before people turned up in crazy ski wear, still sporting lift passes from the 1980s, just as one of Britain’s most famous Olympians joined the party. Eddie ‘The Eagle’ Edwards was full of optimistic cheer, handing out ski jumping tips, posing for pictures and working the crowd. The Stiegl beer flowed as the party atmosphere really started with a mix between traditional music and classic Apres-ski hits. Tirolean legend Paul Heis and his band members from Alpinbanda took to the stage to give lessons on how to yodel and some tips on how to master the art of Schuhplatteln – the thigh slapping dance we Brits love to emulate! What the Austrian Olympians arriving from the Beach Volleyball against Brazil thought is anyone’s guess. Snow was the constant theme of the day and the chairlift feature provided a popular photo booth moment, as did the podium stage for guests to strike a victory pose on.

The Austria House Tirol is free and open to the public daily. Throughout the Olympics the Tirolean Alpine Garden will be open from 10am-10pm, serving food and drinks, with TV viewing screens to watch the Games and catch up with action. The photo chairlift (where you can get a photo taken with the mountainous backdrop), the yodelling telephone box (come and record your best yodel and win a holiday in Austria), and the ski-race podium stage (a Tirolean twist on the Victorian head-through-the-photo-board) will be constant features throughout.

The Apres-ski theme will continue next weekend as Ischgl, one of Tirol’s most famous resorts, hosts its own weekend on Saturday 4th and Sunday 5th August. Billed as the big reunion weekend, it aims to attract people who have been to Ischgl before and to make an introduction to new friends. There will be prizes to be won as well as entertainment from Tirol-based a cappella group The Nicknames and a silent disco featuring three channels, music from ‘Top of the Mountain’ stars such as Katy Perry, Elton John, Kylie and The Killers, traditional Tirolean music and a channel for Apres-ski hits. Come down and join the party – for more information visit the Facebook event page here.

For more insight into the activities around Austria House Tirol take a look at the following three videos:

Video One – To mark the Olympic journey from Innsbruck 2012 to London 2012 a team of 20 cyclists spent 8 days covering 1300km for British charity Disability Snowsport UK.

Video Two – Official opening of Austria House Tirol, with an historic meeting between the Tiroler Schutzen and London Beefeaters and a star-studded guest list with Vivienne Westwood.