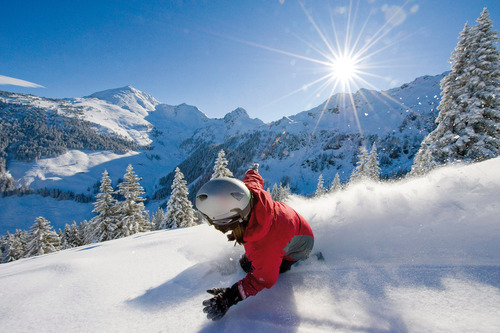 The wait is almost over as the new ski season approaches. The Austrian Tirol region has already seen some September snow and the glacier ski resorts on the Stubai and Pitztal opened at the weekend, with Kaunertal and Sölden opening in October. This coming winter 2012-13 the Austrian Tirol will see the opening of the ‘Ski Jewel’ ski area, connecting the Alpbach and Wildschönau valleys, new hotels in St Anton, East Tirol and Kappl, as well as investment in new infrastructure and innovations and new flights direct from Manchester to Innsbruck with Monarch Airlines.

After eleven years of tough negotiations, the Alpbach valley and the Wildschönau valley will be joined together to form the ‘Ski Jewel’ ski area. Already well respected as ski areas in their own right the combined area will offer 145 km of pistes served by 47 lifts. In conjunction with the existing Poeglbahn cable car from Inneralpbach, the new 8-person cable car to the Schatzberg on the Wildschönau side will see the Ski Jewel enter into the ‘Top Ten’ of Tirolean ski areas. The expansion of the ski areas is viewed as a crucial development for the survival of the smaller ski areas, as more and more skiers are drawn by the attraction of large, modern and sustainable ski areas. The new connection will cost 13.5million Euros, with good prospects for future investments within the hotel industry and infrastructure improvements. A six day lift pass will cost under €200 per person in high season. For more information visit: http://www.skijuwel.com/

The new Wildspitze cable car will replace Austria’s highest ski lift, the Pitz Panorama gondola from October 2012 for this coming winter. The 8-person cable car, with heated seats, will take skiers and boarders more than 2km in under 6 minutes and up to an altitude of 3340m to the Hinterer Brunnenkogel. At the top station will be Austria’s highest cafe, with breathtaking views of the Wildspitze at 3774m, Austria’s second highest mountain and more than 50 surrounding Pitztal mountains over 3000m. For more information visit: http://www.pitztaler-gletscher.at/

Monarch Airlines has announced several new winter routes for 2012-13. Direct flights from Manchester to Innsbruck will start on 13th December and will operate three times a week on Tuesday, Thursday and Sunday, with prices starting from £34 one-way. The airline will also fly to Munich airport from Leeds-Bradford and Birmingham, serving the entire Tirol region. A new flight route from Birmingham to Friedrichshafen will allow convenient access to the resorts in the the west of Tirol, including the Arlberg region and the Ischgl- Paznaun valley. For more information visit http://www.monarch.com

The skiing area of Osttirol is lesser known to the UK market and as an exclave of Tirol, shares no border with the main Tirol state. East Tirol is home to the Hohe Tauern National Park with the largest ski area being the Großglockner Resort Kals-Matrei with 110km of pistes. This winter sees an exceptional development to tourism in the region with the opening of a hotel village resort, the new 4-star Gradonna Mountain Resort. Situated in an enviable position at the bottom of the slopes, this new complex will offer superb views of the Großglockner, Austria’s highest mountain. Opening on the 8th December the hotel has brought together a contemporary design with traditional elements. The bedrooms are made of ‘Zirben’, a special stone pine that is known for its therapeutic properties and ensuring all guests a good night’s sleep ready to hit the slopes in the morning! For more information visit www.gradonna.at.

Kappl is situated along the Paznaun valley and is located just before its better known and more famous big brother, Ischgl. Highly regarded as a family resort, this season sees Kappl step up a gear and attract those looking for a quieter alternative than Ischgl without having to compromise on luxury or design. The new Zhero Fashion Hotel will open on 12th December, offering 60 luxurious rooms, 9 suites and 5 penthouse suites as well as a large spa, beauty and fitness centre.
For more information visit www.zherohotelgroup.com or visit www.kappl.com

St. Anton am Arlberg led the way last season with the opening of brand new hotels theMOOSER and Hotel m3 and the reopening of the Hotel Valluga as a 4* and the Hotel Tannenhof as a 5* hotel. This winter sees the opening of another 4* star hotel, which will be added to the resort’s growing list of high quality and luxury hotels. The „Anthony’s Life & Style Hotel“ is located in St Anton’s pedestrian zone and may be familiar with visitors last season who already had a taste of what to expect at Anthony’s steak-house, café and bar. For more information visit www.anthonys.at

In St Anton, Inghams will offer a brand new chalet development, built specifically for them and due to open in December this year. The new stylish mountain lodge complex is made up of the Chalet Albona, Rendl, Gampen and Kapall, each named after one of the surrounding ski area's famous peaks. The style is smart and contemporary, with attractive open-plan living areas, sleeping up to 10 guests. The operator has also introduced the resort of Neustift in the Stubai Valley, with prices starting from £695 per person at the 4* Hotel Berghof. For more information visit www.inghams.co.uk.

Specialist ski company VIP SKI has added St Anton for winter 2012-13 for the very first time. The super-stylish Hotel Montjola, the second hotel to join the portfolio, will be treated this summer to a total overhaul by a team of interior designers to give the hotel that special VIP twist. For more information visit www.vip-chalets.com

Ski Club Freshtracks has introduced an Austrian Off Piste Weekend in Fieberbrunn. One of the best-kept secrets in Tirol, Fieberbrunn may be small but is famed for hosting the Swatch Freeride World Tour in March and boasts an enviable amount of freeride terrain and some of the best snow records in the Kitzbuheler Alps.

For 2012-13 Neilson has introduced a range of Snow Skills freestyle courses for adults and teenagers at the Vans Penken Snow Park in Mayrhofen. In association with SnowSkool, the 6-day intermediate level freestyle camps will include evening seminars covering board prep, biomechanics, video analysis and more. Camps will be taught by a fully qualified BASI freestyle coach, with some camps led by a former TeamGB freestyler Voted the best Snowpark in Europe in 2011, the Vans Penken Snow Park, has six different lines to suit all riders – there’s the Kids Area, Fun Area, Medium Area, Advanced Area, Pro Area and the half pipe. Adult courses run 15th December 2012 and 19th & 26th January 2013. Teen (age 9 – 16) courses run on 16th February and 30th March 2013.

Catered chalet specialist Ski Total has added Chalet Frieda to its St Anton portfolio, whilst family ski specialists Esprit has added Chalet Markus in St Anton. One welcome addition to all their properties will be FREE Wifi and free private group transfers for big groups. For more information visit www.skitotal.com or visit www.espritski.com.

Crystal Ski offers free lift pass for children up to 15 in all resorts of the Ski Welt (Söll, Ellmau, Scheffau, Westendorf and Hopfgarten) and a new flight from Liverpool to Salzburg for resorts in the east of Tirol. For more information visit www.crystalski.com

Kaluma Ski will be offering four properties in Ischgl for winter 2012-13 and will offer the new St Anton hotel Anthony’s. For more information visit www.kalumatravel.co.uk

And in other news:

Create your own ski movie in St. Johann

This winter the Snowpark in St. Johann in Tirol will be maintained and professionally shaped by QParks, Europe’s largest operator of snowparks. The snowpark will be created with boxes, kickers and jumps for beginners to advanced, as well as a boarder cross with waves and steep turns. The brand new ski movie route means you can swipe your ski pass card, film your best bits and then check out the results on the www.skiline.cc.

For more information on the Tirol region www.visittirol.co.uk or keep updated at www.facebook.com/visittirol