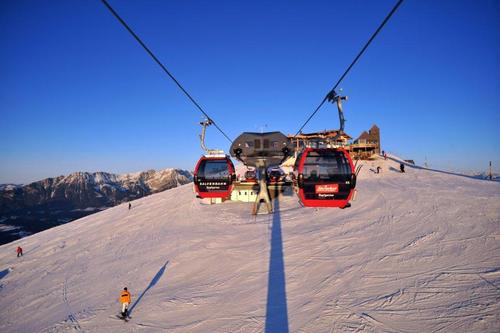 Last season saw an increase in UK visitors to Austria, in part due to the excellent snow conditions and being competitively priced

Choosing the right ski resort can involve some complex comparisons when looking at all the factors needed to make a successful ski holiday. From the variety and extent of slopes to resort transfer times and the après-ski scene all influence the all-important decision making process. As Austria’s largest interconnected skiing area, the SkiWelt Wilder-Kaiser Brixental offers a vast 279km of ski pistes, providing perfect intermediate territory and located just over an hour away from Innsbruck airport. Last season saw an increase in UK visitors to Austria, in part due to the excellent snow conditions and being competitively priced against France and Switzerland.

Here are the top 5 reasons that the SkiWelt should be on the top of your list this winter.

1. Choice is as endless as the pistes

The SkiWelt Wilder-Kaiser Brixental is made up of nine villages, including Going, Ellmau, Scheffau, Söll, Itter, Hopfgarten, Westendorf, Kelschau and Brixen im Thale. Each village is blessed with its own individual character and unique appeal and this is what makes the SkiWelt a top choice. If you want a lively atmosphere head to Söll, if you are looking for a quieter time with Tirolean charm then Going or Hopfgarten is a good choice, whilst Westendorf is ideally situated to enjoy skiing on the SkiWelt and over the Kitzbühler Alps. With a vast array of villages the choice of accommodation is suited to all, from as little as €355 (£286) per person for 7 nights at the Apartments Sport Mayr (T: 0043 699 11020360), based on 6 sharing and including a 6-day SkiWelt ski pass, 6-day ski and boot rental. On the other end of the scale opt for 5* luxury at the Hotel Kaiserhof in Ellmau or the quirky 5* Biohotel Stanglwirt in Going.

2. Brings out your competitive side

If the Olympics ignited that competitive spirit in you then the SkiWelt is the place to burn that desire. With 279km to explore, you can create your own personal Skiline and evaluate the lifts you have used, the total vertical metres and how many kilometres covered on the descent. Over in Scheffau the Ski Movie route allows you to film your personal ski video, a camera clocks you as you pass through the gate and a moving camera follows you down the track with applause sound-effects as you cross the finishing line! If you ever wonder how fast you actually ski, head to the timed speed run, pass through the gate and find out your skiing speed. To check your Skiline during the day stop by the Eiberg meeting point on the slopes, a new area with wooden sunloungers and 360 panoramic views with free WIFI. The Bergkaiser restaurant at Ellmau, the Alpengsthof Hochsöll and on the Choralpe also provides free WIFI. For 2012-13 there is a new Funslope Area at Hochsöll for all freestylers on skis and boards, from beginners to pros.

3. Apres-ski and non-ski activities is hard to beat

Of the nine villages that make up the SkiWelt, the resort of Söll is regarded as the ‘capital’ and renowned for its vibrant après-ski scene, with the Moonlight bar a good starting point after the valley run down, with the Salvenstadl and the Red Horse good to move on to. Apres-ski in the SkiWelt doesn’t have to be all about the drinking, it has Austria’s largest night skiing area with 13km of slopes and there is a 3.5km Moon toboggan run at the Bergbahn Söll, which opened last year. Located at the Hochbrixen mountain station is the Alpeniglu village, made up of 18 igloos and easily accessible for non-skiers too. Every Wednesday and Saturday you can enjoy the Igloo Magic Night for €95, which includes a fondue at the ice table in the igloo restaurant, a tour through ICE LAND exhibition, a torch-lit hike and an ice carving workshop. Or you can stay overnight from €185. Alternative non-ski activities such as horse-drawn sleigh rides, alpine curling, bowling and ice skating on Lake Moorsee are all on offer.

When times are hard one consideration which is all too easy to overlook is the cost of living when you get to a resort. The SkiWelt Wilder Kaiser-Brixental offers some of the most affordable on mountain restaurants in the Alps and with a total of over 70 cafés and restaurants you will be spoilt for choice. Prices can start from as little as €5 (£4) for a hearty Gulasch Soup with bread at the rustic Stöcklalm in Söll, or you can try the Tanzbodenalm restaurant in Scheffau, with table service dishing up some of the best Tiroler Gröstl in the area, setting you back about €8,60 (£7). You can expect to pay about €3 (£2.40) for a half litre of beer and the same for a glass of Coca-Cola and you don’t have to pay to spend a penny, like in some of the French mountain restaurants! For lift passes a 6 day SkiWelt Wilder Kaiser-Brixental pass costs €178 (£144), or opt for the Kitzbühler Alpen AllStarCard, which costs €232 (£188) for 6 days and covers more than 1000km of pistes in ten ski areas, including SkiWelt, Kitzbühel, St. Johann in Tirol and the new Ski Jewel area of Alpbachtal and Wildschönau.

5. Snowsure skiing – and it’s not all about altitude

The SkiWelt may not be able to compete on altitude with some of the high ski resorts in France, but the consensus that you have to avoid the SkiWelt in early and late season is somewhat outdated. Despite the fact most of the skiing is between 800m and 1800m, last season the slopes opened on 10th December and closed on 9th April and this is largely thanks to the outstanding snowmaking facilities in the resort. Out of the 279 km of slopes, 225 km out of them are fitted with artificial snowmaking facilities and such is the serious business of snowmaking they employ up to 40 people to carry out the task and adhere to some of the strictest laws worldwide. With the building of the new Hohe Salve reservoir and the expansion of the snow-making equipment at all SkiWelt locations, the ski slopes will have even more guaranteed snow and be more convenient, even on the sunny side of the slopes. The SkiWelt also benefits from an advantageous geographical position in the eastern Alps and tends to be colder than the western Alps.

How to get to the SkiWelt Wilder Kaiser-Brixental?

Crystal, Inghams, Neilson, Direct Ski, Ski Solutions are some of the many companies offering package holidays to the resorts in the SkiWelt.

The SkiWelt is situated in the best possible location with convenient access to Innsbruck, Munich and Salzburg airports, with transfer times of between 1 – 1.5hrs. Affordable resort transfers from all three airports start from €35 through www.transfer.tirol.at.