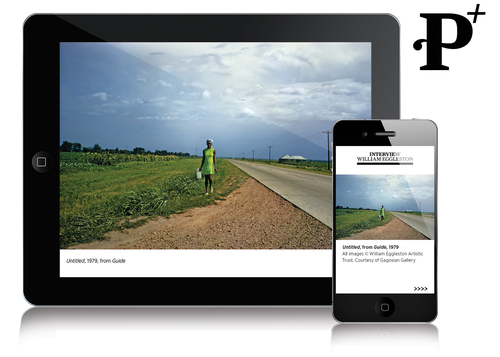 Dubbed British Journal of Photography+, the new universal app offers a dedicated experience depending on the device used. On the iPad, BJP now offers a monthly edition that contains the same articles as those published in print – albeit with extra images, text and videos. On the iPhone, weekly editions are now available, bringing readers the best of the print and iPad magazine in smaller, more regular chunks, which have been redesigned and re-imagined for the smartphone.

Marc Hartog, CEO of Apptitude Media, BJP’s publisher, states: “When we first launched our tablet version of British Journal of Photography, it was a shot in the dark. We had never made an app before, and no one had established any rules about the workflow or how to reach out to people. Eighteen months later, there are more subscribers to our tablet edition than our print edition, and nearly a quarter of a million people around the world have downloaded our iPad app shell. We have had overwhelming feedback from our readers, who say they want a more frequent monthly version that retains the elegance and enhancements that are unique to the iPad - and we have listened."

Hartog adds: “There are more iPhones sold every second of the day than babies born on the planet, so, whether media owners like it or not, tablets and smartphones are rapidly changing the way our audiences engage with our content and brands. This is a publishing revolution and media owners need to embrace it and try new ways of delivering properly designed content where and how their readers want it, or frankly they are doomed.”

The monthly iPad edition offers iPad users three times more content than before, and no matter where they are in the world the magazine will be available at the same time as in the UK, for the same price.

BJP’s initial iPhone edition, which has been in beta since September 2012, has had more than 35,000 downloads. With the app’s new version, iPhone users can read BJP’s award-winning features within an elegant design and, from next month, gain access to exclusive content before anyone else.

The first editions of each are free, with future monthly iPad editions priced at GBP 6.99 and weekly bitesized iPhone editions at GBP 0.69 with various bundled subscription offerings.

Both launch editions are available in the App Store now. Click here to view link.

About British Journal of Photography

Established in 1854, British Journal of Photography is the world’s longest-running and most influential photography magazine, defining the future of photographic journalism. It is available as a premium-quality monthly magazine across the UK and selected cities in Europe, North America, the Far East and Australasia. BJP was one of the first photography magazines to launch online, starting BJP-Online.com in 1997, now reaching more than 100,000 unique visitors per month. BJP was named Photography Magazine of the Year at the Lucie Awards 2012.

Based in the heart of London, Apptitude Media publishes award-winning magazines on tablet devices, smartphones and in print, and is the publisher of British Journal of Photography and Fade To Black. Apptitude Media also helps other creators of print products make the transition to bespoke, re-imagined digital products, offering a full digital contract publishing service. Apptitude Media has been appointed as the UK agent for the Mag+ system. For more information, visit www.apptitudemedia.co.uk

Mag+ is a complete digital publishing ecosystem comprising a plug-in for InDesign CS4-CS6, a powerful web-based backend, and white-labelled reader apps for iOS, Android and Kindle devices. It gives users the fastest, simplest publishing platform to create content optimised for touchscreen devices, without the need for programming skills. Mag+ premiered on the first iPad in April 2010 with the award-winning Popular Science+. Publishers and creatives have now built more than 800 apps, spanning Mad Magazine, Hemispheres (United Airlines), Toyota, WebMD, Outside, Shape and The Nation. From publishers to catalogue marketers, design agencies and app developers, Mag+ is ideal for anyone wanting to bring beautiful, immersive content to the millions using the new generation of digital devices.

Incisive Media is one of the world's leading business-to-business (B2B) information providers, serving the financial and professional services markets globally. We aim to bring product provider and purchaser business communities together using all the varied platforms available to a modern publishing business.