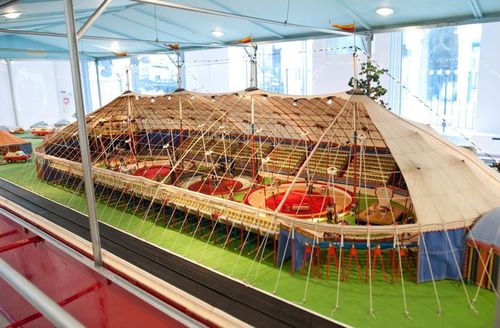 After David Hardie’s death in 2002, the model was stored in various locations until, finally, it ended up in a storage container on a piece of wasteland adjoining a riding stable.

Last year, Lucy Townsend, Hardie’s grand-daughter began researching the model and discovered that it had been packed away in a storage container on a piece of wasteland adjoining a riding stable.

“I persuaded my mother and uncle to take me to look at the model and see whether it was still in a condition that could be saved,” Lucy said.

“When I first saw the container, my heart sank as it was half-buried by the dung heap from the stables but, eventually, we were able to reach the boxes containing the model.

“Miraculously, much of the model was still in good condition and after months of cleaning and renovating, the circus has been restored to its former glory.”

The family have decided that they would rather see the model go to a new home than return to its container so it is going to be auctioned in London by Roseberys on 22nd November.