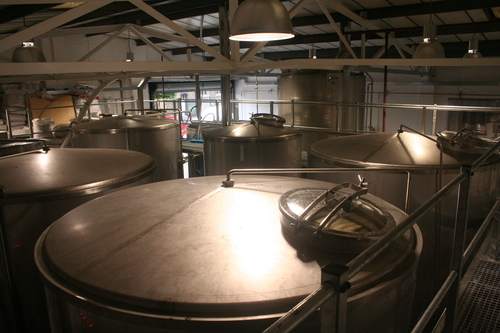 Truman’s, one of the greatest names in British brewing, makes its comeback this September with the opening of its new London brewery after a 24 year absence.

Part of East London’s history for 350 years, an investment of £1million has seen the company re-establish its roots in Hackney Wick, just a stroll down the Roman Road from the original brewery in Brick Lane.

After years of planning, the opening of the new 10,000 sq ft brewery – named The Eyrie, the term for an Eagle’s roost – sees the company once again spread its wings. Specialising in traditional cask ale, the new facility can produce more than 10,000 pints per brew, making it the biggest cask ale producer in East London.

Founded in 1666, Truman’s was once a heavyweight of British brewing – by the late 1800s it was the world’s largest brewer. It fell victim to a hostile takeover in the 80s, after which the pubs were sold and the brewery closed. The company was revived by two local beer lovers in 2010 with the intention of making Truman’s a great name in London brewing once again.

The iconic eagle logo has been given a new lease of life and the new company is being built on the principals that once made Truman’s great, starting with making excellent beer and having a profound respect for pubs and pub culture.

The team has also recovered the original yeast strain - ‘the beer’s soul’ - that was used at the Brick Lane brewery in its heyday. Preserved in liquid nitrogen since 1958 at temperatures of -196c, the yeast will ensure that the beer produced is authentically Truman’s.

Managing Director James Morgan says “The return of Truman’s to London’s East End is one of the most exciting initiatives in ale brewing we’ve seen in decades. We are producing brilliant, flavour-packed ale that is simply a pleasure to drink and we’ve been working hard with the pub community to secure distribution across the UK to ensure that Truman’s Beer is once again a great name in brewing.”

In a first of its kind initiative, the third permanent member of the range is being created in conjunction with the customers of Nicholson’s pubs, one of the UK’s leading ale specialists. In what will be the UK’s largest ever co-creation exercise in the ale category, two competing beers will be on the bar from mid-September, with Nicholson’s guests asked to vote and comment on the two ales. The recipes will be continuously refined according to the feedback given. The winning beer will be announced in November and will then take pride of a place in the line-up.

Despite its closure in the late 1980s, the historic brand has never disappeared from London. You will find its name is still proudly displayed on local pub walls, while the old brewery is today the heart of East London’s creative scene. With its roots firmly re-established, the new brewery will be holding a number of events on the premises to support the local community.

KV Communications was founded in 2011 by Kristel Valaydon, an experienced PR professional with over 10 years expertise within the consumer lifestyle and B2B sectors.