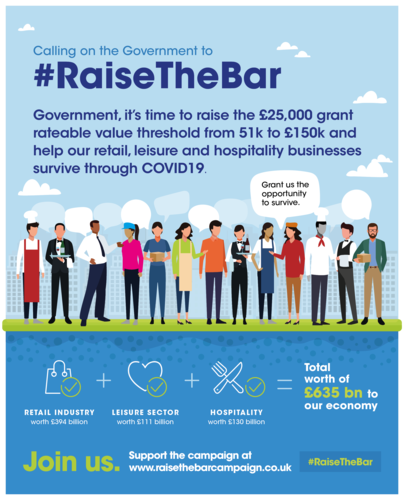 - 54,638[1] businesses across England and Wales are currently unable to access the £25,000 Retail, Hospitality and Leisure Grant [RHLG] according the #RaiseTheBar campaign.

- 86 MPs sign letter to the Chancellor calling for the rateable value threshold to be increased for the RHLG grant[3].

- Rt. Hon. Dominic Raab MP has raised the #RaiseTheBar ask to the Treasury following local concern in Esher and Walton.


UK High Streets are on the brink of collapse as the eight-week countdown to the next quarterly rent instalment begins today, according to the #RaiseTheBar campaign.[4] Figures released today by #RaiseTheBar show 54,638 businesses from pubs to shops, restaurants, cafes, bars, hotels, galleries and gyms are currently unable to access the £25,000 RHLG grant due to their business rates valuation falling between £51,000 - £150,000.[5]

Plans for a £617m discretionary fund announced by Government on 2 May do not go far enough according to industry bodies, associations and business owners across the UK, with no guarantees local authorities will issue relief. The Government has made clear that this fund is for specific purposes, none of which support businesses with a rateable value between £51,000 to £150,000. The #RaiseTheBar campaign estimates a maximum of £1.365bn in Government support is needed to enable the RHLG grant to support all 54,638 businesses falling within a business rates threshold of £51,000 to £150,000.[6]

As part of the RHLG guidance, only those in the retail, hospitality, leisure and assembly sectors with a business rates value of up to £51,000 can access the vital grant, leaving tens of thousands of businesses stranded. The #RaiseTheBar campaign, launched on 21 April 2020, is calling on the Government to raise the arbitrary £51,000 business rates threshold cap to £150,000, allowing over 54,638 businesses in these sectors the chance to survive.

The campaign has secured cross-party support including:

- 86 Conservative MPs wrote to the Chancellor on Friday 1 May, in an open letter calling for the business rates threshold to be increased.

- The Shadow Chancellor Rt. Hon. Anneliese Dodds MP has written to the Chancellor of the Exchequer Rt. Hon. Rishi Sunak MP, to bring to his attention the #RaiseTheBar campaign and the urgent need to raise the threshold above £51,000 due to businesses operating in high-cost areas.

- Rt. Hon. Matt Hancock MP, Secretary of State for Health and Social Care, committed to discuss the need to increase the business rates threshold with the Chancellor following a question from The Sheffield Star in the daily Government briefing on Monday 27 April.

- Rt. Hon. Dominic Raab MP for Esher and Walton has passed the request onto the Treasury following local concern.


The #RaiseTheBar campaign believes access to the £25,000 is the difference between survival and bankruptcy for businesses on High Streets across England and Wales, which have welcomed an outpouring of support from the public during lockdown choosing to support their local communities.

The grant will enable businesses to mitigate significant stock losses and cashflow challenges, including rent, that wage subsidies do not address. Many businesses are not in a position to take on further debt or have serious misgivings about being able to survive the recovery and service loans. Other cash pressures include suppliers, service charges and the cost of re-opening to repurchase stock and ongoing running costs.

Matthew Sims, CEO, Croydon BID and co-founder of #RaiseTheBar campaign said, “Access to the RHLG grant is a ticking time bomb for tens of thousands of businesses on our High Streets and in our local communities. There are just eight weeks until rent is due and the prospect of going under is an uncomfortable truth the Government needs to hear and act upon now. The consequences of failing to increase the business rates threshold are too grim to bear.”

Night Czar for the Greater London Authority, Amy Lamé said, “London’s night time economy makes a huge contribution to life in our capital, but so many of these local businesses are under threat because of the impact of the coronavirus. They have rightly closed their doors to play their part in tackling this health crisis, but too many are not being supported by the government despite losing their entire income. It’s essential the Government raises the bar so that these treasured businesses can get the support they need so they are able to open their doors again when the time comes.”

Claire Alexander, owner The Ebrington Arms and The Killingworth Castle in the Cotswolds [the Good Pub Guide Gloucestershire dining pub of the year 2019],“We were utterly floored when the announcement to save hospitality turned out to mean next to nothing for us because we pay too much in business rates. 9,000 pubs like ours are currently left out and the face of the British pub will change forever if it not extended. We are the main employer in our villages, responsible for the wages of 47 families but we stand to lose everything as we have been abandoned by the grant scheme and its arbitrary cut off point as our business rates are £75,000 and £72,000. The Government has effectively said my business, my staff and the best pubs in the UK aren’t worth saving.”

Richard Burge, Chief Executive of London Chamber of Commerce and Industry, said: “The Government has rightly received praise for its rapid and expansive economic support package during the coronavirus crisis. All these measures were introduced at pace, and understandably there are areas where the detail hasn’t worked for all businesses. One crucial hole is the £51,000 national cap on the business rates relief grant – which penalises many small, and independent businesses in the capital simply because of the high land values in London.

“LCCI support the Raise The Bar campaign, as by raising the rateable value cap it would give thousands of businesses access to the business rates relief that increases their chance of surviving the crisis, and enable them to play a role in London’s recovery.”

Case studies of businesses across England and Wales are available upon request for quotes and interviews. They include pubs, restaurants, shops and Business Improvement Districts.

The #RaiseTheBar campaign was founded by Croydon Business Improvement District and Mr Fox pub in Croydon. The campaign launched on 21 April with an open letter to Rt. Hon. Alok Sharma MP Secretary of State for Business, Energy and Industrial Strategy calling for the business rates threshold requirement in the Retail, Hospitality and Leisure Grant to be increased from £51,000 to £150,000 to save tens of thousands of retail, leisure and hospitality businesses from going under. The #RaiseTheBar campaign continues to explore alternative means of support for those businesses currently unable to access the £25,000 grant.

The #RaiseTheBar campaign launched a Change.org petition on Thursday 23 April and is calling on the public to sign the petition to help save the nation’s High Streets. The petition needs to reach 10,000 signatures to be recognised by Government and has just over 1,000 signatures remaining to achieve this goal.[7]

b. 2,520 sports and leisure facilities [including e.g. gyms, museums, nightclubs and theatres]

The data included in the press release has been provided by property consultants Gerald Eve, based on searches of the Valuation Office Agency’s rating list of all properties in England and Wales, updated as at 29 April 2020.

The £25,000 RHLG grant is available for each property which meets the qualifying criteria and therefore a multi-site occupier can potentially receive multiple grants. The Government on this occasion has stated that this scheme is subject to the new Covid19 EU State Aid rules limiting grant to a maximum of €800,000, or a maximum of about 28 grants each of £25k

[1] Data sourced by Property Consultants, Gerald Eve, from the Valuation Office Agency’s Rating List of the total number of businesses within a rateable value threshold of £51,000 and £150,000.

[2] #RaiseTheBar campaign has multiplied the RHLG grant figure of £25,000 by the total number of businesses within a rateable value threshold of £51,000 and £150,000. The total figure may be less subject to how many businesses apply

[4] Next quarterly rent instalment is due on Wednesday 24 June 2020 - https://www.gdlaw.co.uk/site/blog/sectors-blog/real-estate-b...

[5] Based on research by property consultants Gerald Eve

[8] Data sourced by Property Consultants, Gerald Eve, from the Valuation Office Agency’s Rating List of the total number of businesses within a rateable value threshold of £51,000 and £150,000.