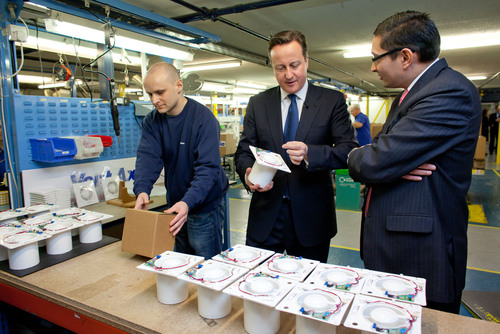 Vent-Axia is a great example of a company that has brought manufacturing back to the UK, creating jobs for hard-working people.

Sussex-based British fan manufacturer Vent-Axia, a leader in low-carbon ventilation, was delighted to welcome Prime Minister David Cameron on a visit to its headquarters in Fleming Way, Crawley, West Sussex, on Thursday 23 January 2014. Mr Cameron visited the successful Sussex firm to view its assembly lines that were brought back to the UK from China. The new production lines create 35 new site jobs in a tough economic climate and increase the number of its assembly staff on site employed by 50% compared to before the reshoring.

Vent-Axia completed the reshoring of the balance of its domestic fan manufacturing, from China back to the UK, in January 2013 with the launch of three new production lines at its Crawley site. The culmination of a two-year project, the new assembly lines doubled the company’s on-site manufacturing of its residential unitary fans. The company invested over £350k in tooling for the new production lines, as well as investing in building works to incorporate the new manufacturing

On his visit Mr Cameron toured the production lines with Ronnie George CEO of Volution, Vent-Axia’s parent company, and spoke to new staff that had joined the company since the reshoring. Prime Minister David Cameron said: “I was very pleased to visit Vent-Axia to see what a positive effect reshoring has had on the company and meet the people who work there. Vent-Axia is a great example of a company that has brought manufacturing back to the UK, creating jobs for hard-working people. As part of our long-term economic plan, we will continue to do all we can to make Britain the best place to start, grow and do business.”

While at Vent-Axia Mr Cameron was also very interested to see a cheque written to the company by the former Prime Minister Winston Churchill, which paid for fans installed in 10 Downing Street in 1945. Having never been banked, the cheque takes pride of place in Vent-Axia’s reception.
Ronnie George, CEO at Volution Holdings, the group that owns Vent-Axia, said: “We are delighted Mr Cameron was able to visit our headquarters at Crawley yesterday and view our production lines. Reshoring the balance of our residential fan production to the UK made sense due to a number of factors not just from a competitive position, but also customer service and responsiveness is substantially enhanced when manufacturing our products locally.

“Increasing our UK manufacturing capacity goes to underpin Volution’s ambitions to be a more substantial international player in the ventilation market, which is illustrated by our acquisition of two Swedish ventilation companies during the last 18 months. Moving Vent-Axia’s manufacturing back to the UK allows us to both supply products abroad to the wider Volution group and prepares us for further international expansion. I was therefore delighted that TowerBrook Capital Partners backed this initiative practically on the first day of new ownership.”

Also present at the visit was Henry Smith MP for Crawley who opened the three new production lines last year. The new UK production lines have improved Vent-Axia’s service offering allowing the company to manage stock levels to help with stock availability. The UK location also makes it easier for Vent-Axia to undergo the continuous development of products and on-going design enhancements to meet customer needs, with the lead time for introduction of product enhancements or improvements reduced.

Vent-Axia employs 270 staff at its headquarters in Fleming Way, Crawley, West Sussex. The addition of 35 jobs at its Sussex site, including 20 new production staff and 6 service support staff, has been a welcome boost to the local Crawley job market.

As well as investing in the local economy Vent-Axia’s commitment to British manufacturing has seen the company further investing in UK logistics which has helped lower the embodied energy of products by reducing carbon emissions. A reduction in international shipping and flights has resulted in a saving of up to 15 Tonnes of CO² a year.

Headquartered in Crawley, West Sussex and with more than 75 years as an influential industry leader, Vent-Axia continues to set the standard in controlling the flow of fresh air, its temperature, humidity and cleanliness. Each year the company supplies air management solutions for over half a million installations across the residential, commercial and industrial sectors in the UK and around the World.

Picture Caption:
Prime Minister David Cameron (centre) talks with Chief Executive Ronnie George (right) and a member of staff during a visit to the headquarters of ventilation manufacturer, Vent-Axia in Crawley, East Sussex where he met and chatted with staff, as the company has recently created new jobs by moving production back to the UK from China and he also saw a cheque written by Winston Churchill to pay for a fan for 10 Downing St in 1945

• About Vent-Axia: For over 75 years, Vent-Axia has set the standard for ventilation. A dynamic British Manufacturer, Vent-Axia is the ventilation sector’s clear leader, chief innovator and forerunner in energy-saving, Lo-Carbon™ products. Providing the sector’s most comprehensive choice from any single manufacturer, Vent-Axia’s range covers not just air movement, air handling and ventilation technologies but heat recovery, electric heating, cooling and clean-air systems for residential, commercial, public sector and industrial applications.
• Moving manufacturing to the UK from China has meant the company no longer needs to hold high levels of stock in its warehouse to anticipate demand. This stock reduction has reduced Vent-Axia’s working capital by approximately £250k.
• New UK production lines have improved Vent-Axia’s service offering allowing the company to manage stock levels to help with stock availability. The UK location has also made it easier for Vent-Axia to make on-going design enhancements to products.
• Volution, Vent-Axia's parent company, is majority owned by funds managed by TowerBrook Capital Partners.

About TowerBrook Capital Partners
• TowerBrook Capital Partners, L.P. is an investment management firm with approximately US$8 billion under management and a track record of creating value for investors. The firm is based in Europe and the USA and focuses on making investments in European and North American companies. TowerBrook primarily pursues control-oriented investments in large and middle market companies, partnering with highly capable management teams and seeking situations characterised by complexity.