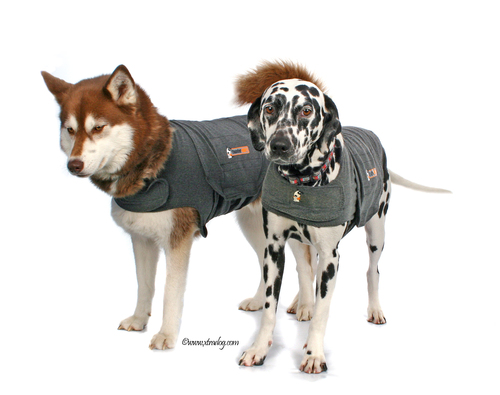 The 5th of November is not a night to remember for dogs but Tellington TTouch Training Techniques and Thundershirts from Xtra Dog can help pet owners to take the fear away from fireworks for their pets.
Alex Wilson, Marketing Director and a TTouch Practitioner in Training from leading pet accessory company Xtra Dog, explains more about how to keep dogs calm during the firework season

Firework season is nearly here again. Traditionally years ago it used to be just one night, November 5th, but today it starts mid October and goes on well into the new year. This can be a horrible time for dogs as so many suffer from noise anxiety and this can be their worst time of the year. There are many ways to help dogs to cope both physically and using equipment
The Tellington TTouch training method has wonderful application for helping dogs with noise phobias. It is a gentle training method, consisting of a series of circles and lifts as well as groundwork exercises to make your animal more aware, more balanced, and less stressed. TTouch Practitioner, Toni Shelbourne explains more,
“Tellington TTouch (TTouch) was developed over 30 years ago by Linda Tellington Jones. The method uses non-habitual movements of the skin to improve the posture of an animal. As posture affects behaviour, the animal’s symptoms decrease as they come into balance. An animal requires physical, mental and emotional balance to be able to simply act, not react to a situation. Think of a saying you use to describe being frightened like, ‘tuck tail and run’, this beautifully describes the posture that a noise phobic animal can adopt. The posture then ‘tells’ the dog how to behave i.e. in a fearful way. Change the posture and a different message is sent, the behaviour diminishes and hopefully disappears over time. There lies the beauty of TTouch, it gets to the emotional core of the issue and helps the dog to change their perception of a fearful stimulus. As the dog can now rationally think its way through the problem, the desensitisation training, if still needed, becomes much more effective. They can now think due to not having to act in an instinctive fearful response. TTouch can be the long term cure as well as the on the spot relief. Better still it is easy to learn and you can do it yourself in the comfort of your own home.”

Xtra Dog offers a couple of solutions that can really help with noise phobia, TTouch practitioners for years have been using body wraps to help calm dogs, horses and even cats. Instructor Kathy Cascade explains,

“One of the most useful tools of the Tellington TTouch method is a simple ace bandage known as a “body wrap.” For years, TTouch and TTEAM equine Practitioners have been using body wraps to influence an animal’s posture, movement, and behaviour. Sometimes the result is subtle, as when a horse picks up a foot to step into a trailer when he couldn’t do it previously, and sometimes the result is seemingly miraculous, as when a dog that is terrified of thunder storms is able to calmly lie down and sleep through the noise. How can a simple piece of cloth have such a wide ranging influence on an animal? Part of the answer lies in how the sensory information from a wrap is processed in the animal’s nervous system.

“Typically, a body wrap is applied to an animal‘s body in some sort of figure eight fashion, making contact around the chest and crossing over the back, sometimes extending to the hindquarters. (Of course we can also use body wraps for people in any number of configurations).

“While the wrap is applied comfortably, it is never put on tightly, as the purpose is simply to bring awareness to the area of the body it contacts, rather than for any type of support. Because of the slight stretch inherent in an ace bandage, the contact provides a light sensation of pressure against the body that also moves slightly as the animal moves. This has the effect of bringing a heightened attention to or awareness of how an animal is using his body parts during movement.”

"When a dog is in a highly aroused state because of fear or frustration, his latent nervous system takes over and he just reacts to his environment. His response may be to deflect, flee, freeze or protect himself, rather than observing his environment, thinking and then offering a learned, measured response. When correctly fitted, Thundershirts exert an even pressure around the chest, shoulders and ribcage. Used with Tellington TTouch body and ground work, they can be particularly helpful to calm a dog so that he is able to observe and think, rather than just react.

“Thundershirts, as the name suggests, were designed to help dogs who suffer fear of thunder and, indeed, they help many dogs in this way. However, Thundershirts can also be very useful when working through retraining programmes with dogs who are reactive or shy and those who do not travel well.”

In a stressed situation it is very important how we introduce the Thundershirt to our dog. Tellington TTouch Instructor Kathy Casade explains more;
"The first step when introducing something new to a dog is to break it down into smaller, manageable steps. Changing the context of the new item can also be helpful. Start by placing some yummy treats on the folded Thundershirt and allow the dog to eat from it. A dinner plate is familiar and usually not scary! Next, unfold the Thundershirt halfway and simply lay it across the dogs back for just a few moments, offering a treat while the dog experiences this new sensation. The next step is to place the Thundershirt fully open on the dog’s back, closing the front connection, but leaving the side panels open. The last step is to close the panels so the Thundershirt is snugly on the dog. At this point, it is very important to allow the dog to move around. This allows the dog to know he is not trapped, and also allows him to integrate the sensations of the Thundershirt against his body as he moves. Remove the Thundershirt after a few minutes. The next session may not require the step by step introduction, but keep the sessions of wearing the Thundershirt fairly short (5 to 10 minutes) for the first few experiences."

Thundershirts and Body Wraps can be purchased from Xtra Dog by visiting their website www.xtradog.com or calling them on 0330 088 3647 or for further information on Tellington TTouch please contact the UK Tellington TTouch office on 01761471182 or visit www.ttouchtteam.com

For photographs and for further information on this press release please contact Angela Baker, Marketing IQ on tel: 01905 359475 or e-mail:angela.baker@marketing-iq.co.uk