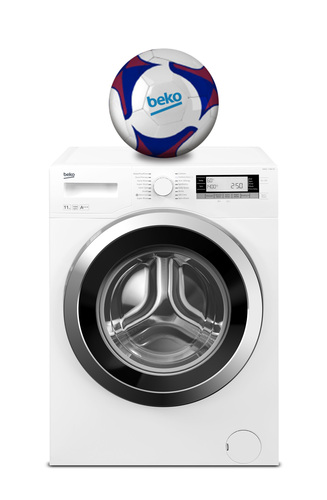 • New research released today shows that almost half of parents go to great lengths to get their children onside with their favourite football team
• A third admits to dressing their child in their team’s kit from birth, while one in ten parents make them watch every season on DVD
• The study also shows that one in five parents believes their child is a future footballing superstar
• And to make sure their child looks the part, two thirds of dads, rather than mums, go to extra lengths to ensure their child’s football kit is at its cleanest

There’s nothing more disappointing for football fanatics than their children deciding to support a team other than theirs, and new research launched today from Beko, FC Barcelona’s new Premium Partner, shows that almost half of all mums and dads are so worried that will happen, they will go to great lengths to make that sure that it doesn’t!

A third of parents admit that they have dressed their child in their team’s kit from birth, one in seven takes their child to every home match, while one in ten say they’ve even made their child sit through every football season on DVD to make sure they support their parent’s favourite team.
However, with that in mind, less than 40% of parents say that their child has actually ended up supporting the same football team as them.

But all would be forgiven no doubt in the eyes of proud footballing mums and dads if their child ended up becoming a football star regardless of who they played for, and one in five parents actually do believe their child is showing all the signs of being a professional footballer. Whilst they hope to have raised the next Lionel Messi or Wayne Rooney, one in five parents also agree that teaching their kids it’s the taking part and not the winning that counts, is the most important aspect of playing sport.

Most surprising is that its dads and not mums that are more likely to make an extra special effort to ensure their children’s kit is clean and well presented! Style on the pitch counts, according to the survey by Beko, two thirds of parents go to extra lengths to ensure their child’s kit is at its cleanest. 70% of dads commit to trying everything from soaking the clothes overnight to splashing out on the latest gadgets to ensure their child looks the part on the pitch. Quality appliances can make it really easy to keep kit looking sparkly clean, and Beko’s new 11kg large capacity washing machine even allows parents to wash a whole team’s worth of kit in just one load; saving time as well as effort.

Ex England footballer and dad Phil Neville comments: “The Beko survey of footballing mums and dads certainly shows how passionate us Brits are about football. It shows that in many households, it’s parenting teamwork that gets kids actively playing every weekend, with both mums and dads playing their part to help their kids in many different ways. It’s interesting to see dad’s coming out top in making sure their kids look the part on the pitch, I’m not sure I can take the credit in our house!”

Shalika Hooda, brand manager for Beko adds: “We love the passion of families when it comes to football, and to try and make their lives easier so that they can spend more time together and less time doing household chores.”

The research for Beko was carried out by Opinion Matters between:

05/03/2015 and 12/03/2015
Sample: 2,040 parents of children aged 18 or under
All research conducted adheres to the MRS Codes of Conduct (2010) in the UK and ICC/ESOMAR World Research Guidelines. Opinion Matters is registered with the Information Commissioner's Office and is fully compliant with the Data Protection Act (1998).

About Beko plc:
Established in the UK in 1990, Beko plc is a subsidiary of large multinational group - KOÇ Holdings and the Arҫelik Group. KOÇ Holdings is ranked as one of the top 350 companies in the world whilst Arçelik, the parent company of Beko, is the third largest company in the home appliances industry in Europe.

Beko, the global brand of Arçelik Group, has increased its market share and reached the position of second largest home appliances brand in Europe. The brand, which maintains its longstanding market leadership in the UK, is the top brand in freestanding home appliances market in France.

Beko is the best-selling large home appliance brand and number one washing machine brand in the UK .

Recent insight from independent consumer reviews on Reevoo , shows the popularity of the brand. Based on impartial owner feedback from May 2012 to April 2014, Beko has achieved an average of 9 out of 10 review score from over 7,000 customer reviews for its range of American style fridge freezers, built-in ovens and large capacity washing machines. Across all Beko products, it has an average review score of 8.6/10 from over 40,000 reviews.

The company continues to develop helpful, innovative and energy efficient electrical appliances, designed to make everyday life easier for families with speedy cycles and energy saving features which can assist in saving time and money. Beko delivers exceptional value and quality, securing high levels of customer satisfaction through listening and responding to householders needs. These factors make Beko the consumer’s brand of choice.

We create ideas to help brands stand out. To help them compete in markets that get tougher every day. To engage with people in an ever-changing media world.