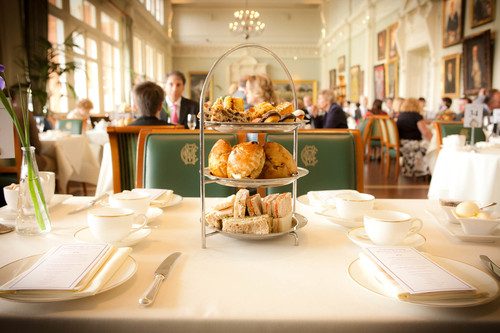 Afternoon tea at Lord’s ranks among the best in London

Afternoon Tea Week takes place on 14th August and in response to high demand for 2017, the new dates will allow more people to enjoy this offering.

There is no better place for a traditional British afternoon tea with all the trimmings than in the iconic Long Room at Lord’s. Here, you can enjoy a sumptuous spread prepared by the in-house catering team whilst enjoying the iconic view across the famous outfield.

Afternoon tea at Lord’s ranks among the best in London where guests can enjoy a traditional cream tea, including freshly baked scones with homemade jam and Cornish clotted cream, along with finger sandwiches containing an array of mouth-watering fillings. Additionally, you can tuck in to some delicious dainties freshly prepared each day by the resident pâtissier at Lord’s.

Selected dates for afternoon tea at Lord’s for the coming months are now available from 13th August through to the 10th December, making a perfect solution for a classic day out right up until the festive period.

Packages start from £48, with the option for guests to upgrade to the £59 package which includes a glass of fine Champagne.

The Lord’s Pastry Chef Laura Crouch has revealed that the secret to the perfect afternoon tea is simple; fresh scones and just the right amount of filling in the cakes so they can all be finished.

Nick Kenton, MCC Head of Sales, Meetings & Events and Hospitality comments: “Afternoon tea at Lord’s is always a unique and memorable occasion. It’s one of those typically British experiences that is not to be missed. With the views of the outfield from the Long Room, it’s a very popular choice for afternoon tea which is why we have added new dates for 2017.”

For all dates for 2017 and for further information about booking afternoon tea at Lord’s, visit the website here.

About Marylebone Cricket Club (MCC)
MCC is the world’s most active cricket club, the owner of Lord’s Ground and the guardian of the Laws and Spirit of the game. Founded in 1787, it issued the first code of Laws in 1788 and moved to its current home in 1814. There are 18,000 Full and 5,500 Associate Members of MCC.
MCC also has a World Cricket committee, which is chaired by Mike Brearley and contains eminent current and former players and administrators – including Sourav Ganguly, Ricky Ponting and Shaun Pollock. It has a remit to act as an independent think tank, debating issues and making recommendations about the health and state of the game and to commission research.
MCC owns the most comprehensive collection of cricket artefacts and books in the world, housed in its museum and library at Lord’s which is visited by tens of thousands of visitors from all over the world each year.

About Lord’s Cricket Ground
The current Lord’s Cricket Ground is its third incarnation. The first ever match played at ‘Lord’s Cricket Ground’ came in 1787 when businessman Thomas Lord staged a game between Middlesex and Essex at a newly built ground in what was then known as Dorset Fields.
By 1811, MCC had moved to a new Ground in the Eyre Estate of St John’s Wood. This ground proved unpopular but when plans emerged for the Regent’s Canal to be built straight through it, Thomas Lord gratefully accepted compensation and moved the Ground to its current location in 1814.

About meetings and events at Lord’s
Lord’s has 12 unique spaces which can host meetings, conferences, receptions, dinners and weddings for up to 1,000 people. From the grandeur of the Long Room in the Grade II* listed Pavilion, to the modernity and style of the J.P. Morgan Media Centre, the venue boasts a variety of spaces, many with great views of the pitch. The venue attracts clients from a variety of industry sectors including corporates, associations and agencies.
For more information on Lord’s, visit: www.lords.org
Connect with Lord’s on Twitter: @Lords_Events