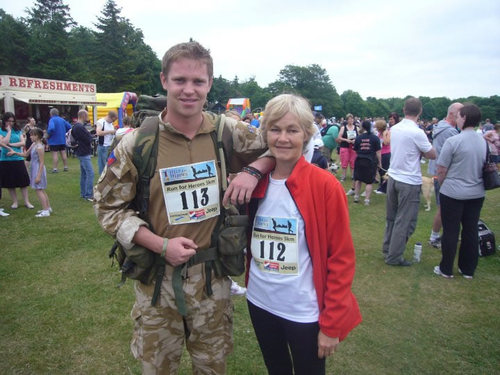 RUN for HEROES is now in its forth organised event, which runs every month on every last Sunday in South Marston near Swindon.

The Event organised by Mike Buss (The Running Man) and his team Beyond Impossible have been organising 5km fun runs for all abilities and ages to help raise money for Help for Heroes.

The latest 5km fun run saw course records smashed and a new up and coming athlete by the name of Adam Wilson (only 13yrs old).

It was Sunday 27th February and runners gathered together at the Mecure Hotel & Spa in South Marston near Swindon for the latest RUN for HEROES 5km.

The line up saw runners aged from 8yrs to 67yrs, of all levels of fitness. It was the coldest race so far since the race series started back in November 2010.

The race set off with the lead runners lead by footballers Gary Chappell and Daniel Hull but it soon became obvious who the real star of the race was at the halfway mark when 13yr old Adam Wilson ran past one of our marshals with at least a 3minute lead on the rest of the pack! The young lad looked totally focused as he carried on unfazed by the fact he was not only leading the race in his race category but he was leading the entire race with some very fit young men trying to close the gap.

Meanwhile Januarys female winner Tracy Curling was in a comfortable lead again for the womens category in her second RUN for HEROES race.

Finally in a time of just 18mins 53secs smashing the course record by 2mins was young Adam Wilson followed in second and third place by Gary Chappell & friend Daniel Hull.

RUN for HEROES is primarily a 5km fun run organised to raise money for Help for Heroes and three other forces charities and was the brainchild of Mike Buss who in 2009 started what would become a fulltime professional career as an ultra marathon athlete who in 2010 broke 14 world endurance records including running the greatest distance in 7days on a treadmill, clocking up 517.25miles.
Whilst competing Mike found that many people were wanting to get involved to raise money for injured troops but knew it takes a huge amount of training to run ultra marathons, and so was born the first RUN for HEROES in May 2010 and with over 450 runners raised over £15,000 for Help for Heroes.

After this even Mike got to thinking why not organise a series of races every month and so in November 2010 the first RUn for HEROES 5km (The Series) was launched with a fund raising target of £25,000 to be raised in 2011.

Also other more adventureous races have been born for 2011 including Ultra Marathons with the Snowdonia 24hr Mountain Marathon to be the most unique Ultra in the UK, the idea is to run up and down Mount Snowdon as many times as possible in 24hrs.

Run for Heroes has a new website still going through a few changes, but is live to check out www.runforheroes.org.uk

The event is currently looking for sponsors to add to the existing sponsors ranging from local business to iconic Global Brands as JEEP.

for more information on the race series or to sponsor the event contact: activelifeuk@hotmail.com

RUN for HEROES is also the only race series in the UK which boasts the giving away of a brand new car... In 2010 Mike gave away a JEEP Patriot worth over £17,000 donated by JEEP UK and in 2011 Mike will be giving another JEEP away this November.
All runners entering any RUN for HEROES race will automatically be placed into the prize draw to win.

For supporters of the race and anyone else wishing to enter you can txt the word JEEP to 60777 (txt cost £1 plus your normal standard txt rate) all profits going to the following supported charities: