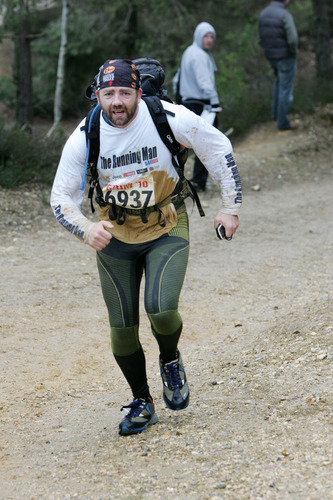 Having been a soldier myself and seen fellow soldier fallen, I feel that we need a lasting rememberance of these heroes

Mike Buss is heavily training again for his next bout of running challenges in support of our Heroes...

Mike Buss known as the Running Man is set for his next two challenges including one new world record.

At the End of July Mike will be setting off from RAF Lynham to John Radcliff Hospital in Oxford along the Repatriation route which goes through Wootton Bassett, near Mike's home town of Swindon in Wiltshire, this run is in support of the petition to rename the repatriation route 'The Heroes Highway' along with renaming the new route which will start from RAF Brize Norton from September due to the future closure of RAF Lynham.

Once Mike has completed his run along the repatriation route which is approximately 30miles, Mike will continue to run to Number 10 Downing Street to hand the petition into Mr. Cameron. In total Mike will have completed over 100miles by the time he reaches London.

Mike will be carrying all the names of the fallen during the Iraq & Afghanistan conflicts along with the petition. When asked why he felt so strongly about the renaming of the route Mike said "Having been a soldier myself and seen fellow soldier fallen, I feel that we need a lasting rememberance of these heroes, we always seem so far behind other countries in honouring our troops. It took the good people of Wooton Bassett to fuel the repatriations in the way they should be done, as before our soldiers were driven through traffic jams seen in so many of our national papers only a few years ago when our repatriations were compared to Canada who renamed their repatriation route to the Heroes Highway years ago. Also in the USA there is more than just one Heroes Highway, there is almost one in every state, so why not here?".

The petition has been growing in interest and support over the past couple of months with over 1000 offline signatures and nearly 300 online signatures. If you would like to support this Petition then go to: http://www.gopetition.com/petitions/the-heroes-highway-petit...

Mike will be looking to complete the 100mile run in one continuous run over night arriving at Number 10 the next morning to hand the petition in. Mike will be supported by his crew driving his Sponsored Jeep and other sponsors supporting this run to make it a success are UK Gear, OMM, X-Bionic and ISO2 Nutrition along with a number of other sponsors.

Although this is about supporting a petition to honour our fallen, you can still support Mike's fund raising for Help for Heroes by going to www.justgiving.com/mikes-worldrecords

Moving onto August Mike will be taking on the toughest trail in the UK, the Cape Wrath Trail in Scotland which starts at Fort William near Ben Nevis and heads north to Cape Wrath. This is a 205mile trail that takes the average person 2weeks to complete crossing several rivers and trail blazing navigating by compass. Mike will be joined for this adventure by a team of veterans supporting Veterans in Action which is a charity that supports soldiers with PTSD (Post Traumatic Stress Disorder).

The trail Mike and the team will be taking is a route never chosen before deliberately pushing the team to their limits, drawing all their experience from their military days. The team will be self sufficient carrying everything they need from shelter to food with no support from outside the team.

Anyone wanting to support this challenge can go to www.veteransinaction.org.uk and make a donation.

For anyone wanting to support this challenge there is also the chance to win a Jeep Compass worth over £17,000 by texting the word Jeep to 60777. Text will cost £1 (which goes to Help for Heroes and Veterans in Action) plus your normal standard text rate.