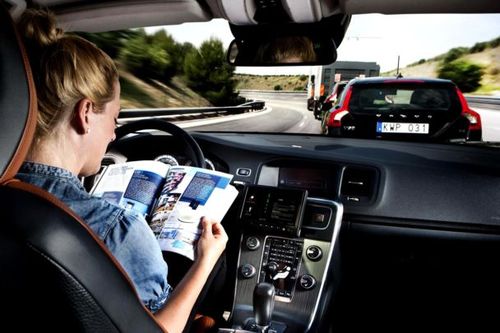 “Very soon, we’re going to see exponential figures of people dying on the road if we don’t start working on technology immediately.”

In a recent report by Motortrades Insight it’s estimated that up to four million people every year could be killed if autonomous cars are not introduced within the next 27 years, according to American car designer Michael Vernon Robinson.

“We’re going to have to find a way to stop killing people,” he said, speaking to Motortrades Insight on the tragedy of motoring accidents causing 1.24 million deaths every year – the eighth largest cause of human fatalities worldwide. With around half of those fatalities involving pedestrians, cyclists, scooter riders and motorcyclists, the Bertone Brand and Design Director said he ‘personally feels responsible’ for that ‘terrible’ figure as a member of the automobile industry.

“We better find a way to stop this long-going war,” he added. “And you could talk about the Afghanistan war, or the Iraq war or the Kuwait war, but these things happen and eight months later they stop. This is going on forever.”

If a car is truly able to drive without the aid of a human being, there would appear to be no need for a steering wheel. “I’ve done a lot of research on how to do accident-free driving. And that means taking the steering wheel away.”

He cited the recent pile-up of 130 vehicles on the Sheppey Crossing in Kent as an example of how humans continue to be the most dangerous item in a car, saying that motorists will always lapse in concentration and become distracted.

“The only way to not reduce but to eliminate accidents is to take the steering wheel away. I believe very strongly that by 2040, all steering wheels in all cars in all countries will be prohibited. If you have a car with a steering wheel, you will not be able to drive it on the road in 2040.”
But if a vehicle no longer has a steering wheel, is it an automobile? “Some might say, ‘Well, that’s boring, I’m not going to buy it anymore. I’ll take a tram’. So it’s our job as designers to maintain that magnetic attraction like the successful automobiles we have today. We have to find new ways of creating an exciting attraction factor into automobiles, even when we take away the steering wheel.”

Garry Chiles, Principal Product Engineer for TRW Braking Systems, said that ‘it’s a little while yet before we get fully driverless vehicles’, reinforcing Mr Robinson’s view that while OEMs including Volvo are working on creating autonomous cars, the steps being made are ‘all incremental changes rather than giant jumps into the future’.

Mr Chiles said that as autonomous technology is in its infancy his team continues to refine radar systems which can scan the road ahead for animals, children, vehicles and other moving or stationery objects, combining the radar with Autonomous Emergency Braking.
Next year, Volvo will introduce its large Animal Detection technology in the XC90, while the Swedish brand has already won awards for its Cyclist Detection system which was recently introduced across the range.

Speaking to Motortrades Insight“The most dangerous thing in the motor car is people,” explained British car designer Steve Harper. “You can make a motor car as safe as possible but at the end of the day, the most dangerous thing is that nut behind the wheel. Having worked for eight years at Volvo, one of the things you realise is that you can make a car prevent accidents but over the years what that’s done is made cars heavier and heavier
because you’re trying to make them survive accidents against four tonne trucks or three tonne SUVs. Your car has to be able to survive that kind of impact.
“If you avoid the situation of accidents completely, you could actually make lighter cars which would then become more fuel efficient. If it takes away the problem of accidents, the autonomous car also has the advantage of enabling you to do other things while you’re making that boring journey sitting in a traffic jam on the M25.”

Motortrades Insight is published by The Resourcer Group who own and operate a number of online resources which provide information to the general public about UK businesses, products and services. The group are based in Brentwood Essex.

We are the definitive on-line directory service for all things motoring within the UK. High rankings on the major search engines; Google, Bing/Yahoo and Ask deliver a growing number of visitors each month which in turn generates you business. We list just about every type of business connected to the world of motoring, and if motoring is your world, you simply have to get listed.