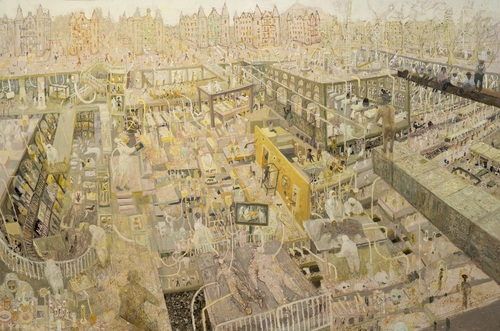 Five extraordinary paintings are in with a chance of winning the coveted £25,000 first prize in the John Moores Painting Prize 2020.

The five shortlisted paintings are: The Neanderthal Futures Infirmary by Robbie Bushe, Compost by Michele Fletcher, The Motherland by Steph Goodger, March by Stephen Lee and The Common by Kathryn Maple. Learn more about the artists here

MEDIA CONTACT: For interviews or image requests contact:laura.johnson@liverpoolmuseums.org.uk or 07971 495 983

The shortlisted works are among the 67 paintings to be exhibited in the John Moores Painting Prize 2020, at the Walker Art Gallery from 12 February to 27 June 2021.

A virtual tour of the exhibition explores the rich diversity of paintings on show until the gallery can reopen.

The winning painting will be acquired by the Walker Art Gallery and join its world-class collection, while the artist will also have a future solo display at the gallery.

Due to Covid restrictions the 2020 jury, Hurvin Anderson, Michelle Williams Gamaker, Alison Goldfrapp, Jennifer Higgie and Gu Wenda, judged and selected all of the works online for the first time in the history of the Prize. High spec cameras, screens, speakers and AV software allowed judges to appreciate the scale, texture and detail of the works in real time. It also enabled a rich dialogue between the judges, a vital and cherished part of the process. Despite the changes an important fundamental of the competition remained in place; all judging was done anonymously, allowing the artworks to speak for themselves.

For the first time this year there will also be a £2,500 Emerging Artist Prize, supported by Winsor & Newton, to be announced on 4 March.

Visitors to the exhibition will also be invited to vote for their favourite painting in the popular Visitors’ Choice Award. Now in its 11th year, the Prize, sponsored by Rathbones, awards the winning artist £2,020.