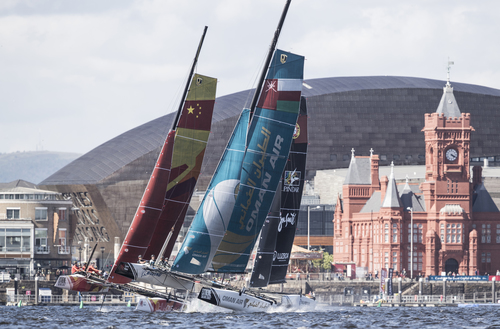 Renowned for its thrilling Stadium Racing, the adrenaline-fuelled Extreme Sailing Series™ returns to Cardiff Bay for the sixth consecutive year over the August Bank Holiday weekend, as the headline act of the Cardiff Harbour Festival.

As well as the adrenaline-fuelled GC32 Stadium Racing, the 12-strong fleet of high-speed two-man Flying Phantom catamarans will battle for the final time this season, with the 2017 champion to be decided on Cardiff Bay.

The free entry Fan Zone offers front row seats to the exhilarating on-water action alongside on-shore activities to keep the whole family entertained. Located near the Norwegian Church, it will be open to public from Saturday 26 to Monday 28 August.

There is plenty to see and do in the Fan Zone; take your pick from the eclectic mix of food and drink stalls, from New York Street Food to Welsh Hog Catering; and enjoy captivating live music from Welsh folk-roots band Rusty Shackle on Saturday night.

There is a whole host of family-friendly activities going on inside the free entry children’s entertainment zone, located at Britannia Park, including storytelling, arts and crafts and circus workshops, a play area and lawn games. Don’t miss the best dressed pirate and sea creature competition at 14:00 on Monday.

The Act 6, Cardiff, official prize giving ceremony will close the event on Monday at 17:45, located outside of the Norwegian Church.

For a truly unique experience, including the chance to get on board the flying GC32 catamarans during racing, the Extreme Sailing Series offers a range of VIP packages. More information can be found on the official website.

Take a look at the schedule below or visit the official event page for everything you need to know about the UK leg of the ultimate Stadium Racing championship.