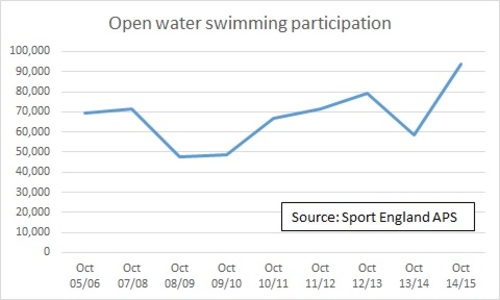 The newly released data shows that 93,500 people participated in open water swimming, according to these criteria, between October 2014 and October 2015.

Data just released by Sport England as part of its Active People Survey (APS) shows a big jump in the number of people participating in open water swimming despite the widely-reported decline in general swimming numbers.

Overall, swimming is still the UK’s most popular participation sport with just over 2.5 million people regularly taking to the water but numbers have been falling steadily in recent years. The reasons for this decline are multi-faceted and complex and both Sport England and the national governing body for swimming, the Amateur Swimming Association, are working hard to address them.

One concern is that pool swimming is perceived as boring. Recent technology advances and a proliferation of tracking and sharing apps have helped boost other sports such as cycling and running, possibly at the expense of pool swimming.

However, according to specialist publication H2Open Magazine, open water swimming offers many of the attributes that these sports have and pool swimming lacks.

“Open water swimming is exciting, adventurous, sociable and challenging,” says H2Open founder, Simon Griffiths. “The sport – or rather, activity – really does offer something for everyone. For the competitive, there are mass participation races; for the adventurous, there are long distance challenges and swimming tours; for endorphin junkies, there’s cold water swimming; and, for the sociable, there are now clubs and groups that meet around the country to swim, eat cake and chat. In addition, some of the tracking and route sharing technology used in cycling and running also works brilliantly in open water.”

The APS measures participation of at least 30 minutes, at least four times in the previous four weeks. The newly released data shows that 93,500 people participated in open water swimming, according to these criteria, between October 2014 and October 2015. This is the highest number recorded since the survey began in 2005.

“While these numbers are great news, we’d love to see even more people taking up open water swimming,” says Griffiths. “It’s good for both your mental and physical well-being and it’s a really open and welcoming community. We’d also love to see open water fully embraced by Sport England and the ASA as we believe it can be a catalyst for reversing the decline in pool swimming. When people start swimming outside they often also start going to swimming pools for training and practice.

“Finally, we’d also be delighted to welcome prospective open water swimmers to our Open Water Swimming Show at the Henley Mile on 10 July 2016. This year, for the first time, we’ll be hosting a special ‘Introduction to Open Water Swimming Experience’ for people who want to try out the sport. Alternatively, more experienced swimmers could tackle one of the day’s competitive events such as the ‘suits versus skins’ challenge.”

H2Open Magazine covers all aspects of open water swimming, from wild swimming to swimming holidays and long distance challenges, and it’s relevant to anyone who’s interested in open water whether they are just starting out or have multiple English Channel crossings to their name.

Find out more at: www.h2openmagazine.com

For details on the Open Water Swimming Show at the Henley Mile see: http://henleyswim.com/events/henley-mile/