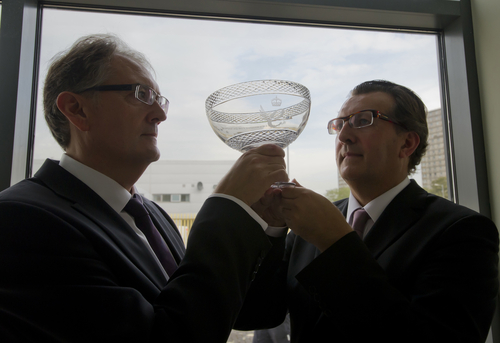 AN oil and gas software company set up by two Scottish brothers has earned the royal seal of approval for its global business activities.

Physicist brothers, Dr Lindsay and William Wood, set up Glasgow-based Sciencesoft Ltd in the late 90s and today the company provides its state of the art 2D and 3D visualisation and analysis software to more than 120 companies in 80 countries.

The company which employs 19 at its Govan headquarters has been awarded a prestigious Queen’s Award for Enterprise in International Trade. Export sales account for 90% of Sciencesoft’s turnover which this year is expected to total £3m and generate a £1m profit.

Reservoir simulators are the main prediction tools used by engineers in petroleum companies to forecast future oil and gas production.

Such is the power and flexibility of the software that major oil and gas companies have now adopted Sciencesoft’s Reservoir Simulation Suite as standard.

Dr Lindsay Wood, Sciencesoft’s research and development director, said: “Securing a Queen’s Award for Enterprise in recognition of our overseas sales performance is a fantastic tribute to the efforts of our entire team.
“We remain focused on producing world‐class software products for our existing and new clients, enabling them to make faster and more informed planning and development decisions.”

Lindsay’s wife Dr Angela Wood who is the business development director and has been involved since the company’s launch joins the brothers in the management team. The couple attended a special reception for Queen’s Award winners at Buckingham Palace and met the Queen and Prince Philip.

As well as the Queen’s Award for Enterprise, Sciencesoft’s team won the John Logie Baird Innovation Award for its newest software package, S3GRAF­HPG earlier this year.

This new product allows reservoir engineers to load large simulation data files, which had previously taken over one hour to load, in a matter of seconds.

Sciencesoft has seen an annual growth rate of 25% since 2002 – significant especially in the recent recessionary period.

Lord Provost Winter who toured the company’s HQ and met all the staff said: "Sciencesoft Ltd is truly a worthy winner of this Queen's Award for Enterprise.

“I congratulate this family firm for its ambition and success in providing world-leading products that enable multi-million pound businesses to work smarter and faster.

“It's a remarkable success story to celebrate in these difficult economic times.”

It’s PDS MEDIA’s business to get the right PR for your business. Our job is also to ensure your social media profile is as sharp and as effective as it needs to be for this ever-changing online world. If it’s the right words, the perfect pictures, the key messages, the soundest soundbites or the best defence in times of crisis then PDS MEDIA is there to support. old fashioned cameraSound PR advice. Media relations. Copywriting. Corporate newsletters. Crisis management. PDS Media can do it all.