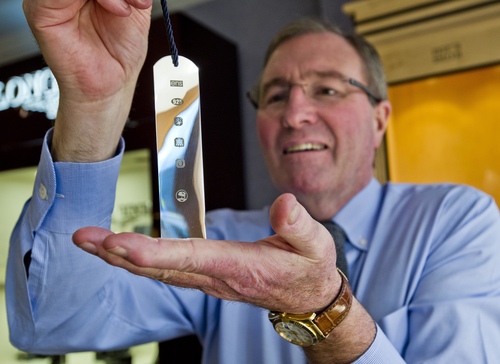 AWARD-WINNING Scottish jeweller Eric Smith is making history after winning his
campaign to rescue a piece of Glasgow's forgotten past.

After year-long negotiations, the Glasgow businessman has been given permission to revive the city's hallmark - exactly 50 years after it was last struck.

Now, all his designs for gold, platinum and silver jewellery, produced by craftsmen at his Newton Mearns workshop, can bear this internationally-recognised stamp of quality.

Glasgow Art School graduate Eric, who has operated his Eric N Smith Ltd business along with his wife and co-director Yvonne for more than 35 years, said:

"I'm delighted with this development. With Glasgow very much on the global stage, particularly because of next year's Commonwealth Games, I felt it was important that the city's hallmark should be revived."

Dating back at least to medieval times, hallmarking is now seen as a form of consumer protection, ensuring that base metals are not passed off as high-quality gold, silver or platinum.

In Scotland, hallmarking has been regulated by assay offices since the 15th century.

Glasgow's mark, based on the city's coat of arms, was a combined tree, bird, bell and fish.
The mark was last struck on July 1, 1963 and the following year it was withdrawn when the Glasgow Assay Office closed its doors and the Edinburgh Assay Office, which opened in 1457, took responsibility for hallmarking all jewellery made in Scotland.

"Having studied and worked in the jewellery industry in Glasgow all my life I felt is was only fitting that the city's mark be revived because it's part of our heritage," explained Eric, whose business attracts clientele from all over the UK and Europe.

"Our jewellery designs, manufactured by experienced craftsmen in our workshop, are a key part of our business. While many jewellers now outsource production to places such as China we're unique in basing the production of our
gold and platinum jewellery here. It's wonderful that from now on all our new and exciting designs can carry the new hallmark to highlight their Glasgow origins."

The latest hallmark is a new design as required by the Joint Assay Offices committee which comprises representatives from Assay Offices in Edinburgh, London, Birmingham and Sheffield.

Measuring between three and five millimetres, like its predecessor, it features part of Glasgow's coat of arms.

It is struck next to the date mark, the maker's mark and the rampant lion symbol representing Scotland.

Glasgow-made jewellery made of precious metals will also continue to bear the Edinburgh hallmark which, since 1975, is a three-turreted castle with a lion rampant.

Scott Walter, Assay Master and chief executive of the Edinburgh Assay Office, said Eric N. Smith Limited has been given "express permission" to apply the new hallmark to its bespoke jewellery.

Although much of the country is feeling the impact of the 'age of austerity' Eric N. Smith, like other luxury brands, is weathering the downturn.

"Our business is trading well despite the economic climate," said Eric who has won awards for his innovative and distinct designs.

"Leading brands such as Rolex, Chopard, Breitling and Georg Jensen are performing well alongside our own designs.

"We find ourselves in a strong position in the market and the new hallmark allows us to put our own 'stamp' on our products which we're proud to say are made in Glasgow."

It’s PDS MEDIA’s business to get the right PR for your business. Our job is also to ensure your social media profile is as sharp and as effective as it needs to be for this ever-changing online world. If it’s the right words, the perfect pictures, the key messages, the soundest soundbites or the best defence in times of crisis then PDS MEDIA is there to support. old fashioned cameraSound PR advice. Media relations. Copywriting. Corporate newsletters. Crisis management. PDS Media can do it all.