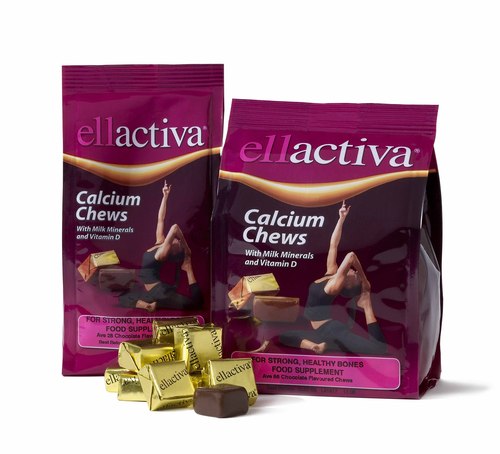 British women are putting themselves at high risk of premature bone ageing and bone diseases such as osteoporosis new research has found.
The vast majority (98 per cent) of women say they understand the role calcium plays in bone health but worryingly, just one per cent recognise that they should be getting at least 800mg of calcium a day.
Despite osteoporosis affecting half of all women over the age of 50, only seven per cent of all women try to ensure they get enough calcium in their diet. 45 per cent admit the issue of getting enough calcium has not even crossed their mind according to the 'Bone-Age' study of 4,500 British women commissioned by chocolate flavoured calcium chew ellactiva.
46 per cent have no idea if bone disease runs in their family, and only six per cent of women in the pre and post menopausal age group take a calcium supplement to boost their dietary intake.
Despite this, 85 per cent of women are concerned about their bone health with one in three women (37 per cent) who would change their lifestyle for healthier bones if they knew what to do.
Signs of poor bone health such as a hump back (68 per cent) and walking with a stoop (38 per cent) were rated higher than grey hair when asked about what visible signs of aging women worry most about.
65 per cent said they do worry about losing their independence in old age following ailments such as hip fractures that can result from bone disease.

Leading nutritionist Fiona Hunter explains, "It is important for women to get enough calcium in their diet in their twenties and thirties whilst they can still ‘lay down’ new calcium deposits and strengthen their bones. After this time, if not enough calcium is absorbed from the diet alone, the body will naturally take this from the body’s existing bone deposits. This can steadily lead to serious bone health problems in later life.
“Many women throughout their lives follow restrictive fad diets, many of which dangerously eliminate dairy products. At these key life stages and if you are on a restrictive diet it is vital that you supplement your calcium intake sufficiently with a product such as ellactiva to reduce the risk of developing bone health problems.”

Ellactiva chocolate calcium chews – 28 chews £4.00
new ellactiva chocolate flavoured calcium chews are a delicious way to give your body all the calcium and minerals needed to build and maintain healthy bones. Just two chews will give the recommended daily allowance of calcium and are only 20 calories each. Every packet of ellactiva contains 28 chews and costs £4.00 available at Boots.