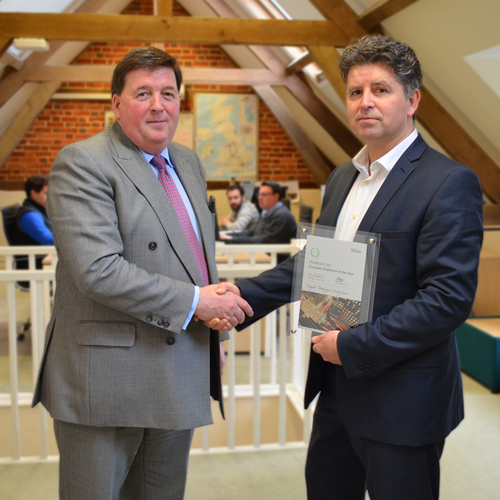 After a year of partnership, Purdicom takes the Siklu distribution crown in Europe as the Wireless Distributor Eyes Further Expansion in 2015

OXFORDSHIRE, UNITED KINDOM – January 29, 2015 – Purdicom today announced that it has been officially awarded as the “European Distributor of the Year” 2014 by Siklu the leading millimetre wave vendor following the first full year of partnership between the two companies resulting in a year of rapid growth, secure channel development and setting a firm foundation for 2015.

“Purdicom’s first full year of partnership with Siklu has been exciting and with cooperation from the great team from Siklu, the millimetre wave wireless innovator, we have successfully capitalised on various markets, government schemes and high speed connectivity demands presented within the UK & Ireland market place.” Commented Hugh Garrod, Managing Director for Purdicom. “Our dedicated Solutions Team formed in late 2012 has proved a storming success where we have found it to become the “go-to” experts in its given markets.”

Whilst celebrating the 2014 triumphs with Siklu, Purdicom is looking forward and has ambitious plans by continuing to grow in current markets whilst diversifying into new territories to increase revenues by over 50% in 2015. Siklu have hinted towards exciting future product developments and expanded UK resources to be announced soon which sets to cement its position as the most deployed millimetre wave vendor in the UK. Siklu’s plans for 2015 gears the vendor to lead the still young millimetre wave market and also gain more market share from the saturated UK microwave and 5Ghz market.

“We are pleased to award Purdicom as the Siklu European Distributor of the Year 2014 and are equally excited for what 2015 will bring. With further technology developments, we aim to provide more millimetre-wave gigabit links to partners throughout 2015 supporting them in projects be it high speed internet connections, CCTV or other types of fibre/leased line replacement.” Commented Andrew Westerman, Sales Director, Northern Europe for Siklu.

The announcement comes as Siklu is sponsoring the “Wireless for Critical CCTV Security & Public Safety” 2015 event hosted by Purdicom. The event, held at Purdicom’s offices on 5th March 2015, will enable CCTV integrators to work with industry leading technology that will keep them competitive to help councils and private organisations to meet the rising demand for enhanced public safety and surveillance solutions. This highly beneficial event will provide attendees with knowledge of the industry, verticals & technologies to assist in penetrating the market that is in high demand for wireless technology.

Purdicom also recently achieved ISO9001 accreditation cementing its dedication to consistently providing products and services that meet the needs of customers. Ramping up customer engagement and rewards is a key agenda on the 2015 Purdicom manifesto with the wireless distributor to release information on more events and programs soon.