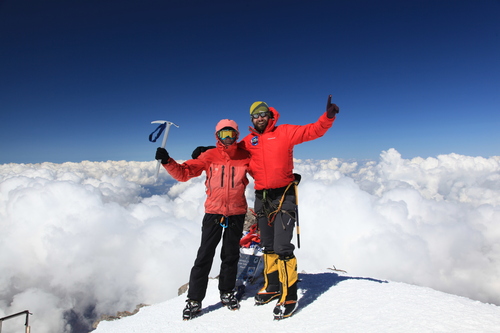 “We’ve trained hard and the logistical arrangements are set. It’s now over to the weather gods and our inner resolve to help us succeed

PORT-AU-PRINCE, HAITI, December 20, 2013 – Scottish Adventurer & Aid Worker Ricky Munday, 36, today announced that the South America 3 Peaks Expedition team are making final preparations for their post-Christmas departure to Argentina, where he will lead an international team on a 38-day expedition into the remote and arid high plateau of the Puna de Atacama and High Andes of northern Argentina. Ricky explained more about the expedition objectives:

“Our main mountaineering objective is to climb the three highest mountains in South America, which are all over 6,700m. That’s over five times higher than the UK’s highest mountain, Ben Nevis! We’ll face extreme physical challenges. At that altitude, the amount of oxygen available is less than half (43%) compared to sea level, which places severe demands on our heart and lungs. We’ve completed a challenging training program that included ascents of Elbrus, the highest mountain in Europe (5,642m) and Pico de Orizaba, the third highest in North America (5,636m). At the start of this expedition, we’ll first acclimatise on three peaks up to 6,100m to help our bodies adapt to the thin air. Once acclimatised, we’ll tackle the 3 Andean giants. The conditions will be brutal, with strong winds battering us daily and blizzard conditions possible on the three highest peaks. Summit temperatures are likely to drop below minus 30 degrees C. We’re fortunate to have some fantastic clothing and kit sponsors on board who are providing specialist clothing that will protect us from the elements and increase our chances of success.”

By undertaking the expedition, the team is raising funds for Macmillan Cancer Support in memory of Ricky’s twin uncles who both died from cancer. So far, they have raised almost £1,700 on their JustGiving page. Expedition Leader Ricky explained more:

“I believe that we all have an obligation to act as responsible citizens. Thanks to my work for the Red Cross and my expeditions, I have the privilege of visiting places that many people can only dream about and I feel compelled to use my expeditions to help others. I’m excited and proud to be raising funds for Macmillan so that other families can benefit during their darkest moments. The Macmillan nurses were an incredibly important resource for my family during my uncles’ final days. My career in humanitarian aid is focused on supporting the most vulnerable people in developing countries, but I also want to help those closer to home.”

Carolina, who has a background in ultramarathons but who undertook her first major mountaineering expedition only 12 months ago, explained: “We’ve trained hard and the logistical arrangements are set. It’s now over to the weather gods and our inner resolve to help us succeed. It’s incredibly exciting, but very daunting, to take on these massive and remote mountains back-to-back on such an arduous expedition. We hope to do all of our supporters and sponsors proud. We’ll be sending daily voice updates by satellite phone to our ipadio channel, which will automatically update our social media channels.”

Munday has been on mission in Haiti with the Red Cross since July 2012. In 2004, he completed the ‘toughest footrace’ on earth, the Marathon des Sables, where he ran 220km in 6 days through the Sahara desert in temperatures up to 48 C. Since 2005, he has planned and completed mountaineering expeditions to 10 countries on 5 continents. He plans to complete the North America Twin Peaks Expedition in 2014 and to climb Mount Everest in 2015. The South America 3 Peaks Expedition is the latest leg of his long-term Triple 7 Summits project, during which he is attempting to climb the three highest peaks on every continent.